Westpac has released a new iPad application which it says focuses entirely on the customer experience, but remains uncommitted as to when the app will be available on tablets running Google's popular Android platform.

The new Westpac iPad app, called Westpac Mobile Banking for iPad, was launched in the iOS App Store on Tuesday 10 July but was formally unveiled at a media briefing in Sydney today.

Westpac says the app was produced with "enormous amounts" of customer feedback and will continue to evolve with user feedback, but cited "proliferation of devices" as a reason why the app isn't currently available for Android tablets.

"We're driven by demand, but the thing with Android is it really comes down to the proliferation of devices and screen resolutions etc. so we're really just working around that," said Harry Wendt, Westpac General Manager, Online and Mobile. "We'll bring out an Android app, but we're not there yet."

Earlier this month, the Commonwealth Bank released a version of its Kaching mobile banking app for Android phones, while it also unveiled a completely new software platform and an Android based merchant terminal.

The Westpac Mobile Banking for iPad app focuses on the basics including checking the balance of one or more accounts at a glance, transferring money between accounts and paying bills.

"We could have just stretched our existing mobile banking app and stuck it on the iPad, some people have done that," explained Wendt. "We could have converged mouse clicks into finger taps on the screen, but we really wanted to go back to the fundamentals about what does an iPad do and how you use and interact with it."

The app uses a visual representation of bank accounts with the ability to see the balance of each account as soon as you log-in. Users can drag and drop an account on top of another to transfer money in between accounts, can pay other users or bills through BPay and can email the receipt of any transaction.

Westpac says users can't currently add new payees or billers through the app, but stressed these features would be added in the next version. The app works in both portrait or landscape modes, allows users to switch between consumer and business accounts without the need to log-off and uses video content in the help menu.

"We've taken a very different approach to help and we've used video to demonstrate that. Large amounts of help are unnecessary if you build and design a very intuitive system and that's really what we are trying to do here." 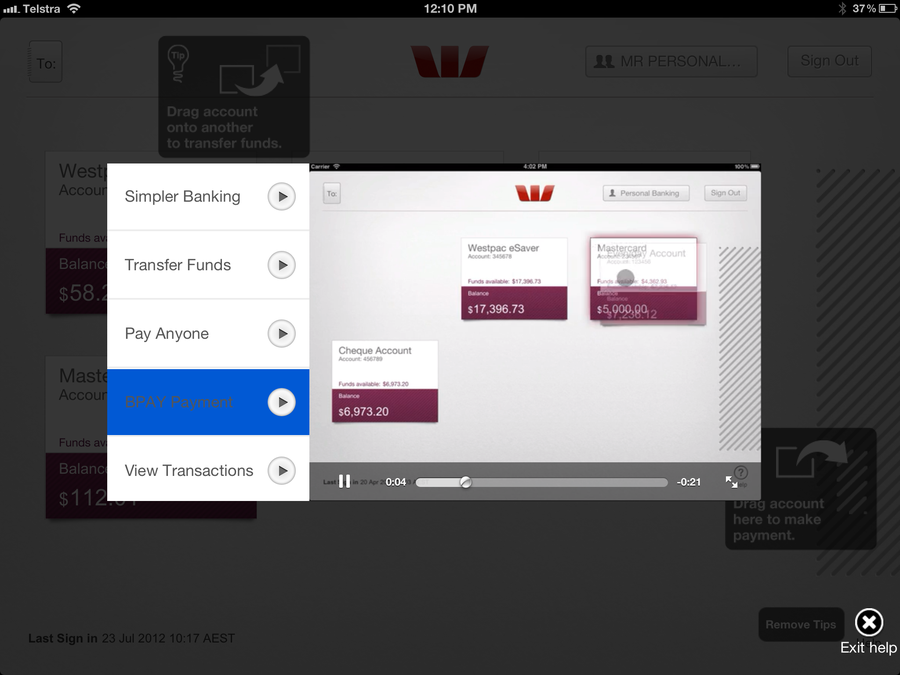 The video based help menu in the new Westpac Banking for iPad app.

The Westpac Mobile Banking for iPad app is available now in the Apple iTunes store free of charge.