The Commonwealth Bank has cited a need for improvement in point-of-sale (POS) transactions as the driver behind a completely new software platform and an Android based merchant terminal.

Albert, the Commonwealth Bank's new POS system, runs on the Android platform and is described as an "omni-commerce device.

Officially announced today, CommBank Pi is an open software platform that will enable third-party developers to create applications for business use. The apps will be distributed through the bank's secure AppBank platform and can be used on a touchscreen POS terminal called Albert.

Albert runs on the Android platform and is described as an "omni-commerce device". It features a magnetic stripe for swiping credit cards, an EMV chip reader, can process contactless payments through NFC and has a 7in touchscreen. It also comes standard with 3G and Wi-Fi connectivity, with direct Ethernet connectivity an optional extra.

The Albert device has been designed to improve interaction between retailers and their customers and claims to offer a vastly improved user experience over traditional POS terminals.

"By far the most frequent interaction that our customers have with their money is purchasing at the point of sale," said Commonwealth Bank's Executive General Manager of Corporate Banking Solutions, Kelly Bayer Rosmarin. "We looked at the experience it is currently and decided that there was lots of room for improvement. We spoke to consumers and business and we found there was a big disconnect in the experience customers are having and what they would like to have."

Albert will come with a range of applications designed by Commonwealth Bank including a bill splitting app and an app that allows users to redeem voucher codes. However, third-party developers can create apps for the Pi platform using Commonwealth Bank's software development kit. 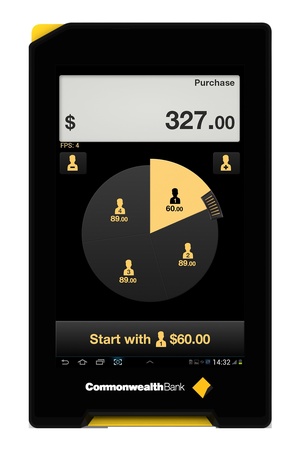 The CommBank developed bill-splitting app, as demonstrated on the Albert POS terminal.

"What we've done is create an ecosystem, at the core of the ecosystem is Pi, but what we can build on top of Pi is any app you can imagine, explained Bayer Rosmarin. It's not just third parties, it's our customers themselves who can now tailor this point of sale experience to their own brand."

In addition to Albert, the new Pi platform will also be available on Leo, a case that attaches to an iPod touch, iPhone 4 or iPhone 4S and transforms the device into a merchant terminal. The accessory includes an EMV chip reader and a magnetic stripe for reading and swiping credit cards and can process contactless payments.

At a media demonstration in Sydney today, Commonwealth Bank suggested Leo is targeted particularly at tradies or other small businesses who wish to use a more efficient payment system when doing mobile business. Albert is positioned at businesses like clothing retailers or restaurants who will not necessarily need to travel.

"We went back to the drawing board, blank sheet of paper. We decided to take a human centered approach to designing a new way to interact at the point-of-sale," said Bayer Rosmarin.

The Albert device is manufactured by Wincor Nixdorf, a German based producer of terminal devices including banking systems, POS systems and self-checkout solutions. There will be two models available, one with a printer to produce sale receipts and one without.

There will also be multiple variants of the iOS based Leo accessory. It will work with the iPod touch and iPhone 4/4S models and can be purchased with or without a barcode scanner.

The Albert POS device won't be officially available until 2013, while the Leo case is currently in testing and is expected to be available to merchants next month.

Pricing hasn't been announced, but the bank says the cost of installing the new devices will be "similar to existing merchant installation".