Telstra has announced the launch of its ninth 4G product in Australia, the Pre-Paid Wi-Fi 4G modem. The modem is available from tomorrow through Telstra stores and online. 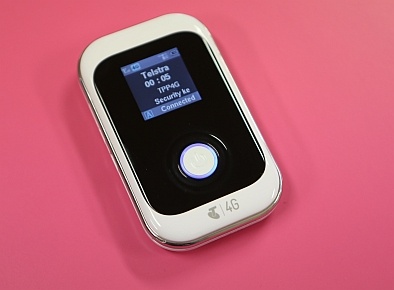 Telstra's Pre-Paid Wi-Fi 4G modem ($169) will be available from tomorrow.

The Telstra Pre-Paid Wi-Fi 4G is battery powered and allows up to five Wi-Fi enabled devices to connect to it wirelessly for shared mobile Internet access. It is just the second 4G wireless modem to launch in Australia, following the debut of Telstra's Mobile Wi-Fi 4G modem to post-paid customers back in March.

The Telstra Mobile Wi-Fi 4G modem has an LED display that shows Wi-Fi name and password, signal strength, number of devices connected and battery level. Telstra says the device will provide up to four hours of battery life and 100 hours of standby time.

In a 4G coverage zone, Telstra promises the Pre-Paid Wi-Fi 4G can access typical download speeds ranging from 2 megabits per second (Mbps) to 40Mbps, while typical upload speeds range from 1Mbps to 10Mbps.

When not in a 4G coverage zone, the Pre-Paid Wi-Fi 4G falls back onto the company's regular Next G network, supporting HSPA+ dual channel speeds of 1.1Mbps-20Mbps.

"In 4G coverage areas the Telstra Pre-Paid Wi-Fi 4G provides download speeds that are up to five times faster than other Pre-Paid mobile Wi-Fi devices in Australia," said Telstra Mobile director Andrew Volard. "Telstra Pre-Paid mobile broadband offers a wide range of recharge options and customers enjoy the flexibility of not being locked into a fixed term contract with minimum spend commitments. This makes it a great solution for people who have different data needs each month."

Telstra's 4G coverage is currently available in all eight capital cities (5km from GPO) and their respective airports in Australia, along with around 80 regional and metropolitan centres (3km from city centre).

Telstra debuted its 4G network in September last year when it launched the 4G USB modem. The telco has since released a number of 4G compatible devices including the HTC Velocity the Samsung Galaxy Tab 8.9 4G, the Samsung Galaxy S II 4G and more recently, the HTC One XL.