The Commonwealth Bank has finally released a version of its Kaching mobile banking app for Android phones, almost seven months after the app debuted on Apple's iPhone. However, the much heralded NFC payment feature is not available.

Kaching for Android will allow Commonwealth Bank customers to make peer-to-peer payments (P2P) via mobile, e-mail and Facebook, but lacks the ability to make payments using NFC (Near Field Communication) technology. The ability to make NFC wireless payments is the key feature of the iPhone version of the app.

The lack of NFC payments in Kaching comes despite the fact that many Android phones sold in Australia include an NFC chip. The Samsung Galaxy Nexus, Samsung Galaxy S III, HTC One X and One XL, and the Sony Xperia P all utilise NFC technology.

Neither the iPhone 4 or the iPhone 4S smartphones have a built-in NFC chip but use a compatible iCarte case to provide the required NFC technology for contact-less payments.

The Kaching for Android app links to the phone's address book to enable mobile and e-mail payments, while the app links directly to your Facebook ID to enable payments via the social networking service. The Kaching for Android app also enables mobile, e-mail and Facebook payments to non Commonwealth Bank customers by directing these users to a secure, external site to collect payments.

Outside of P2P payments, the Kaching for Android app enables access to all basic banking transactions including account balance check. Users can also top up credit and debit cards linked to their account, pay bills through the BPAY service and locate nearby ATMs.

Kaching for Android requires Android version 2.3 or greater to run, but only a spattering of phones are currently supported by the bank, from Samsung and HTC. The Commbank site lists the following models as being compatible straight off the bat:

A notice on the bank's Web site says that Kaching will "progressively be made available to other Android phones", but for now, unless you own one of the listed HTC or Samsung phones, you won't be able to use the app.

Interestingly, we managed to install Kaching on an HTC Rhyme Android phone (not listed by CommBank as a compatible device), which runs Android version 2.3.5, through the Google Play store on a PC Web browser. The phone was initially listed as a compatible device and we were able to install the app without any issues. When we tried to use it, however, we received an error message informing us that the app would not run on that phone. 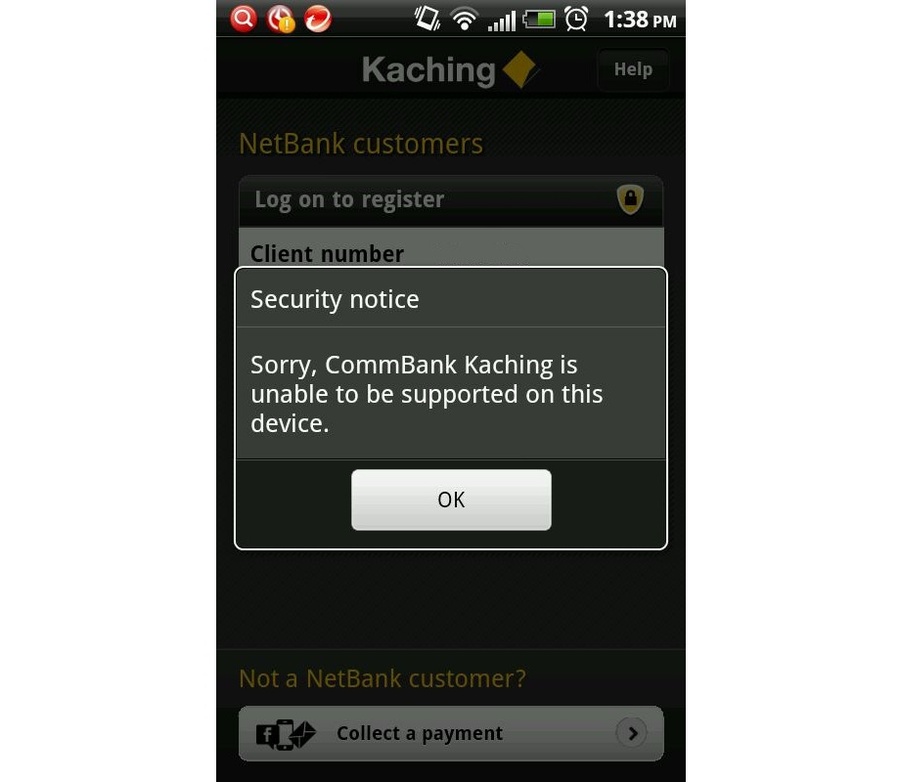 The error message received when trying to use Kaching on an HTC Rhyme Android phone.

The CommBank Kaching app can be downloaded through Google's Play Store now.