Virgin Mobile has reduced the amount of post-paid mobile plans it offers to consumers and added the new HTC One S Android phone to its device portfolio, the telco announced today.

The Optus mobile virtual network operator (MVNO) has reduced the amount of postpaid mobile plans from nine to five in a bid to "make things simpler for customers". The new Virgin plans vary in price from an entry level $29 "big plan" to the $89 topless plan, which offers unlimited calls and text to any Australian phone number along with 4GB of data per month.

"Last year we reduced our number of rate plans from 19 to nine and at the time we found that it really resonated with customers," said Derek Cummins, head of devices at Virgin Mobile Australia. "This year we are reaffirming our commitment to making things simpler for customers by reducing our number of plans from the nine that we had last year down to five."

"So in market today now we have just five plans, but we think those five plans do a pretty big job. On our big plan 29 and 39 you've got market leading included value and we're also going to put any handset on those plans," he explained. 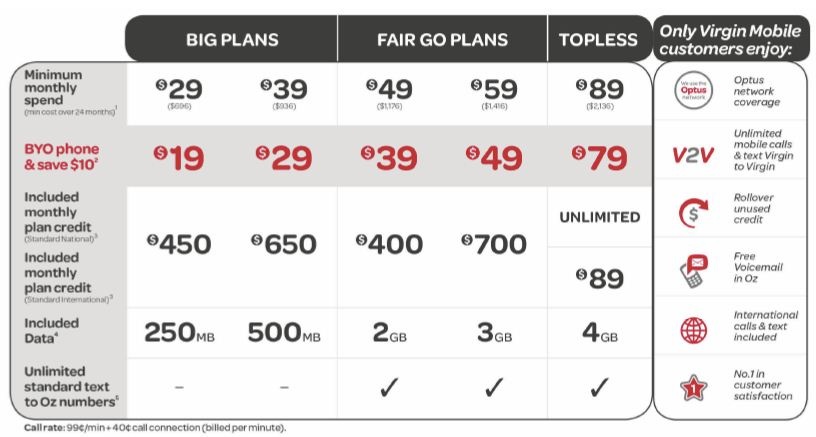 The new Virgin Mobile post-paid plans, starting from $29 per month.

Virgin Mobile customers who sign up for a new postpaid plan and bring their own mobile handset will receive $10 off the plans. A contract isn't required for BYO plans.

In conjunction with the new postpaid plans, Virgin Mobile has launched the HTC One S, a mid-range Android smartphone. It will sell for $0 upfront on Virgin's new Big Plan $39 over 24 months.

The One S is constructed from a unibody aluminium frame that's 7.6mm thick. It boasts many of the same features as HTC's flagship One variants, the HTC One X and the HTC One XL.

The new Virgin Mobile campaign can be seen below.