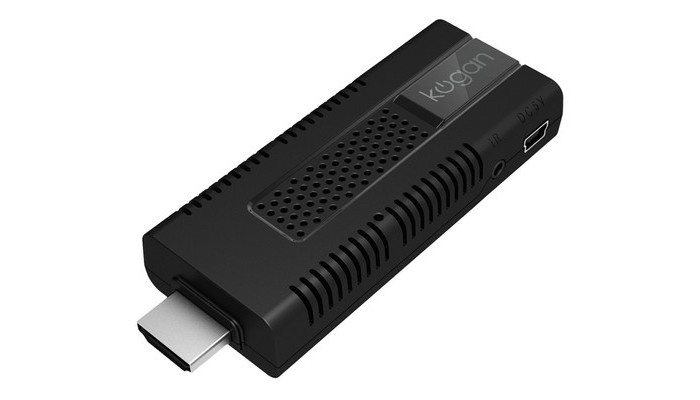 The USB flash drive-sized Agora dongle plugs into a HDMI port, so it’s compatible with any recent television. It also requires an external power source, but can be powered by a TV USB port — the Agora Smart TV uses a mini-USB port for power, so there’s a mini-USB to USB cable in the box as well as a regular power adapter.

The Agora Smart TV also has a full-size USB 2.0 port and a microSD slot, each of which will accept up to 32GB of external storage — Kogan suggests using these to store downloaded HD movies and photos for viewing on the device.

The bundled remote control of the Agora Smart TV uses infrared, so an additional infrared receiver must be plugged in. Alternatively, a wireless keyboard and mouse can be plugged into the USB port. Another option is the $39 Kogan wireless trackpad and keyboard, also announced today. The wireless trackpad and keyboard uses RF wireless to communicate with its receiver, so line-of-sight is not needed (unlike with IR devices).

Kogan is taking pre-orders for the Agora Smart TV dongle, which will ship from the end of July.

Kogan founder and entrepreneur Ruslan Kogan told GoodGearGuide that the company was also working on TVs with integrated Smart TV features: “Of course. Internet TV is the future, it's one of our main focuses at Kogan. People are sick and tired of being told what to watch... [they] want to watch what they want, when they want. Internet TV allows that.”

Kogan also dished out simultaneous praise and criticism to competitors LG and Samsung, talking about those companies’ attempts at voice and motion control on their Smart TVs, saying, “I think that it's great that these companies are experimenting with new technologies and not resting on their laurels.”

He wasn’t entirely enthused about the gesture- and speech-based controls of products like the LG LM9600 and Samsung Series 8, though: “I've played with some of it, and it seems a bit gimmicky to me. I find it much quicker and easier to flick to what I want using a well designed remote control, rather than waving my arms around the room.”

He didn’t rule out any possibility of co-opting the technology into future Kogan products, though: “That said, I'm sure the technology is just in its early stages, and will see a lot of improvement. If customers decide that they want this technology and there is demand for it, that is when Kogan will implement it into our TVs.”

Smart TV interfaces, integrated into high-end TVs from Samsung, Sony, as well as in the form of the Apple TV and Google TV, rely heavily upon app integration for services like video on demand.

Kogan said that while streaming internet TV is the current darling, big-screen games and other apps are the next big thing: “[Video on demand] is currently the main advantage of Internet TV. Big screen apps and games will come shortly after, but there has been very little development in this space.

“It will need a lot of developers around the world to recognise that this is the future. When they do, they will dedicate time and energy to the big screen.”