Optus has today announced it has begun taking online pre-orders for HTC's new flagship Android phone, the One X.

The telco will officially launch the One X smartphone in early April, but has opened pre-orders on it's Web site. Optus says customers who pre-order the phone by Thursday 29 March will receive delivery by Monday 2 April, though those living in regional areas will have to wait until Wednesday 4 April.

The HTC One X will be available on a range of Optus plans but the hero plan appears to be the $59 Optus cap over 24 months. The One X will be available for $0 on this plan which includes $750 of calls and MMS messages, unlimited SMS messages, 2GB of data and unlimited access within Australia to Facebook, Twitter, LinkedIn, MySpace, eBay and Foursquare services per month. Optus will also sell the HTC One X on a range of its business plans.

In a special promotion offer, Optus has also revealed that consumer customers who pre-order the HTC One X on a 24 month contract will receive two months of their bill for free. In a similar deal, business customers will receive three months access for free.

The Optus announcement comes just a few days after Virgin Mobile revealed the HTC One X will be "coming soon". The Optus MVNO published pricing details on its Web site late last week, and tells consumers to "check back in early April for updates."

Unveiled last month at the Mobile World Congress (MWC) trade show in Barcelona, Spain, the HTC One X is the company's first smartphone to feature a quad-core processor, NVIDIA's 1.5GHz Tegra 3 chip. The One X also has a large 4.7in Super IPS LCD2 with a HD resolution of 1280x720 and will come standard with a Near Field Communications (NFC) chip, 32GB of storage and an 8-megapixel camera with backside-illuminated sensor.

The One X also marks a new design trend by HTC. It uses a single block of polycarbonate plastic, the same material found on Nokia's Lumia 800 and N9 smartphones.

The HTC One X runs the latest 4.0 Ice Cream Sandwich version of Google's Android operating system and is skinned with HTC's Sense 4.0 UI.

Though Optus and Virgin will both release the One X, Telstra is widely expected to launch a slightly different 4G version of the phone, the HTC One XL.

Optus' pricing for the HTC One X is listed below: 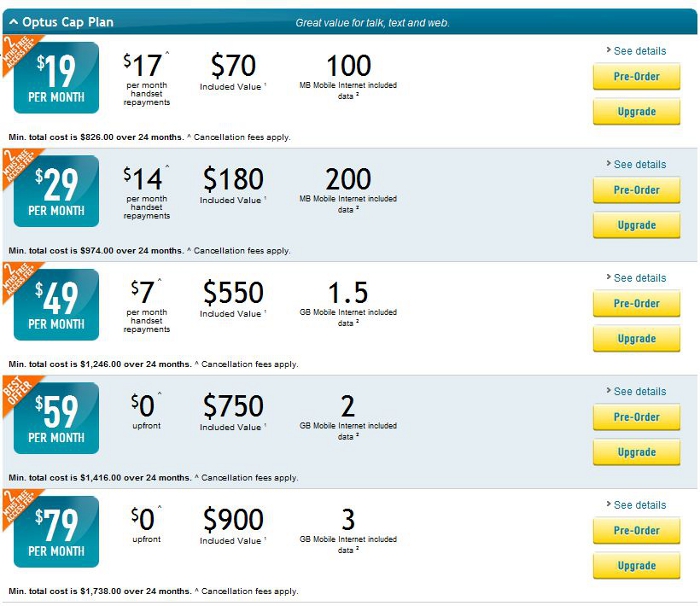