The latest version of Google's Android software &#8212; 4.0 or Ice Cream Sandwich — has been released but when will your LG smartphone get it?

The good news is that LG has already released some details about its upgrade process. The bad news is that most of these upgrades will take a significant amount of time — the company's global ICS upgrade schedule will begin in the second and third quarters of this year (April at the earliest).

In the second quarter of 2012 LG has promised to upgrade the newly announced Prada Phone by LG 3.0, and the Optimus 2X, which was the first dual-core smartphone in the world. Vodafone will exclusively launch the Prada Phone in March, while the LG Optimus 2X originally launched through retailer Harvey Norman but is now stocked at mobile virtual network operator (MVNO) Crazy Johns.

LG's Optimus 3D (Optus) and Optimus Black (all carriers) will be upgraded in the third quarter of 2012 (July at the earliest). 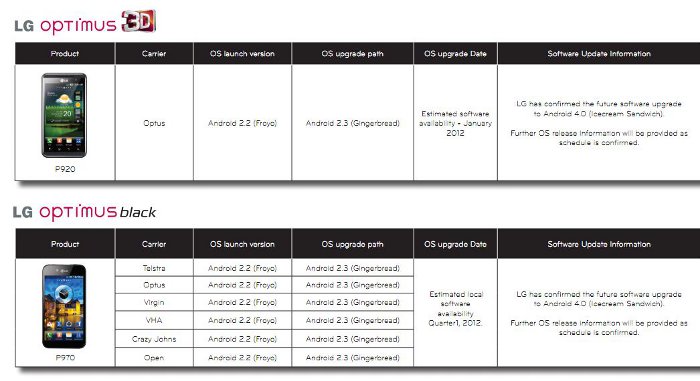 LG has been clear to point out that the exact time frame for each of these upgrades will vary by market, depending on the carrier and the particular smartphone in question. We detailed these issues in our feature on why it takes so long for Android phones to receive the latest software updates.

LG's original Optimus, the Optimus One and the Optimus Me (P350) will not be receiving Android's Ice Cream Sandwich update. The company says it is currently "evaluating the future software upgrade" for LG's Optimus Spirit, a pre-paid smartphone exclusive to Telstra in Australia. As it's an inexpensive prepaid handset, the odds of the Optimus Spirit getting an ICS update are very low.

We have compiled LG's ICS upgrade information into a convenient table below for your reference and will keep it updated as local information comes to hand.