Samsung is the first big manufacturer at CES 2012 to publicly show off an OLED TV, with today's announcement of the ES8000 'Super OLED TV': a 55in screen with (supposedly) high-end picture quality and some innovative features like voice and gesture control through a camera and microphone integrated into the TV's chassis. 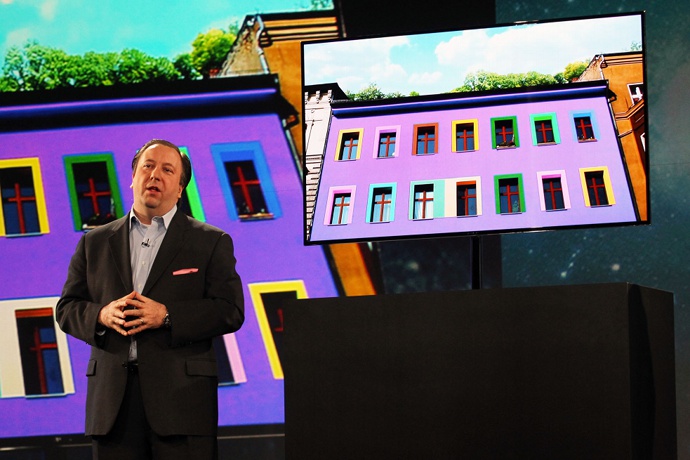 No official pictures of the TV have been released yet, but going on previous OLED TVs we've seen, Samsung's 2011 TVs, and some hints from the CES introduction video, the TV is very thin and light with a tiny or nonexistent bezel and a thin stand: what the company is calling "a new era of minimalistic design", with an overall weight "significantly less than a Samsung LED TV of the same size" — that's less than 18KG.

Samsung waxes lyrical: "When powered on — a bright, vibrant picture illuminates the screen from edge to edge. When turned off, the TV appears like a framed piece of luxurious floating glass; when hung on the wall, it more closely resembles a work of art than an electronic device."

OLED is one of the holy grails of display technology, with theoretically perfect contrast — per-pixel lighting and power means blacks are black and whites are white, with no loss of detail as long as each individual OLED pixel can display every shade of grey from black to white. Power consumption should be lower because of this, too. Colour accuracy is theoretically better, although earlier OLED TV models had problems with blue pixels fading especially quickly, so we're cautious here. Most important, though, is an excellent response rate: no blurring as clunky old LCD pixels shift their aged bones, just clean and efficient OLED performance that should mean motion blur and jittery video playback will be a thing of the past. 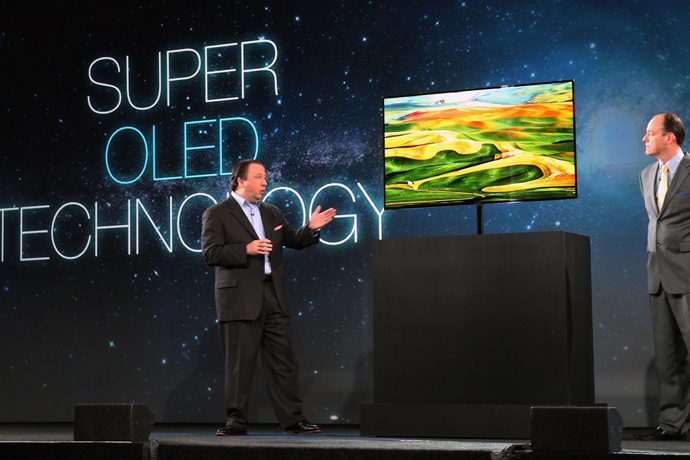 Here's what Samsung has to say about the Super OLED TV's picture quality: "[The Samsung Super OLED TV] features vivid and true-to-life picture quality in both 2D and 3D, with significantly improved colour accuracy compared to conventional LED TVs. Since light output on the Super OLED is controlled on a pixel-to-pixel basis, some of the truest blacks and purest whites can be achieved. Further, the Samsung Super OLED offers response times over 1,000 times faster than LED, helping to eliminate motion blur even in the fastest-moving scenes.

Super OLED technology helps eliminate the need for a colour filter as the OLED pixel unit comprises self-emitting RGB sub-pixels laid directly on the display panel, each emitting its own light. The technology is also able to differentiate varying degrees of blacks and shadows, so that users can enjoy enhanced detail even in the darkest of scenes for the ultimate TV experience."

The Super OLED TV also integrates a technology that's making its way into other high-end Samsung LED and plasma TVs also announced at CES: voice control and motion tracking for gestures, handled by a tiny camera integrated into the front of the TV screen. Samsung's so-called 'Smart Interaction' uses a HD camera and two microphones to "complement the remote control" (not replace it, seemingly), letting viewers turn the TV on or off, raise or lower the volume, and launch apps through speech. Voice-controlled searching is also being touted.

Samsung's Smart Hub service is also getting an upgrade in 2012 TVs, with 'Kids', 'Fitness' and 'Family Story' services introduced: child-friendly games, workout programs and a slideshow function. Samsung says further video-on-demand services will be joining its apps platform throughout 2012, although no details are available: "local and rich content" is as much as the company is saying.

No price or release date for the Samsung ES8000 Super OLED TV is available in Australia (or the US, surprisingly): expect it to be above the most expensive LED panel, so in the region of $5000 or above. We're hoping for a launch before the 2012 London Olympics.