Among our readers, at least, LG seems to have emerged as the brand to beat in the high-definition television market. Readers gave LG sets high marks for ease of use and reliability (along with Panasonic), as well as for features such as connection ports and the remote control. Mitsubishi owners, on the other hand, were dissatisfied with their HDTVs' design, durability, and ease of use.

Highlighted in the two charts below are our survey participants' ratings of HDTV manufacturers in two general areas: reliability and features. These results are drawn from our 2011 Reliability and Service survey of some 63,000 PCWorld readers. The other product categories covered in this survey were desktop PCs, laptop PCs, tablets, digital cameras, printers, and smartphones. For a closer look at the methodology we used in our survey to gauge manufacturer reliability and customer satisfaction, see "Reliability and Satisfaction: What the Measures Mean."

In the HDTV portion of our R&S survey, we found some statistical details and some comments from PCWorld readers worth highlighting:

• On our ease-of-use measures, the manufacturers with the highest approval rates ("extremely satisfied" or "very satisfied") were Panasonic and LG; meanwhile, Mitsubishi and Sony limped to back-of-the-pack finishes on these measures.

• "I'm very pleased with design, screen clarity, ease-of-use of the remote; and it's very light for its size." -- LG HDTV owner

• "Mitsubishi bought defective light engines from a manufacturer. TVs with this part are developing white spots. I have contacted Mitsubishi; the part has been ordered. I shall see if they want to charge me for their problem." -- Mitsubishi HDTV owner

• "The bulb went out, and some kind of motor quit. Had we not purchased the EXPENSIVE extended warranty, which replaced it, we would have had a 65" piece of 3-year-old junk." -- Mitsubishi HDTV owner

Four HDTV vendors received better-than-average marks on two of our four reliability measures: Both LG and Panasonic won kudos for "any significant problems" and "overall satisfaction with reliability"; Magnavox drew praise for its record on "problem on arrival" and "severe problem"; and Sharp distinguished itself on "any significant problem" and "severe problem." Relatively few manufacturers got tagged with worse-than-average grades on our reliability measures, but Mitsubishi ran the table with negatives -- a sign that it needs to reexamine its quality assurance processes.

The oddball result on this chart relates to Samsung, which received one of two worse-than-average marks (for "severe problem") assigned to a vendor other than Mitsubishi and yet scored one of only three better-than-average marks (along with LG and Panasonic) for "overall satisfaction with reliability." We're not sure what to make of that anomaly. 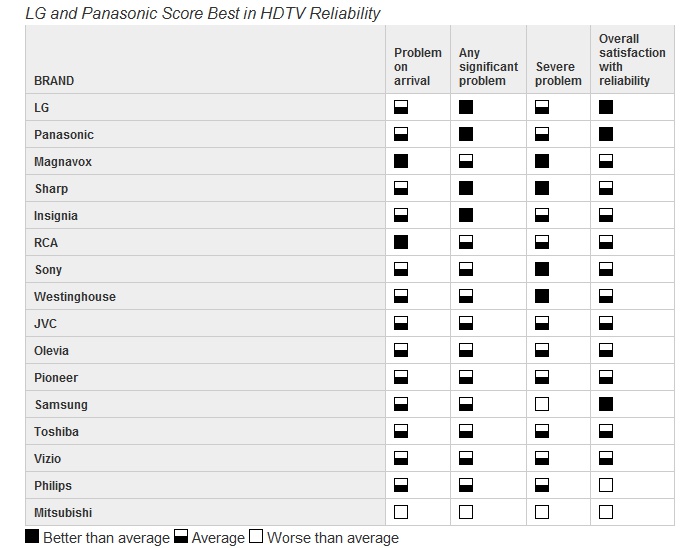 On our features measures for HDTV manufacturers, LG, Samsung, and Sony were the stars. LG chalked up better-than-average marks on five of the eight criteria, including the only plus score on the chart for "warranty." Samsung an Sony followed close behind, with four and three positives, respectively. At the bottom of the heap, with two negatives and no positives, are a clutch of vendors: Insignia, JVC, Philips, and Westinghouse. Still, no manufacturer scored exceptionally poorly on features. 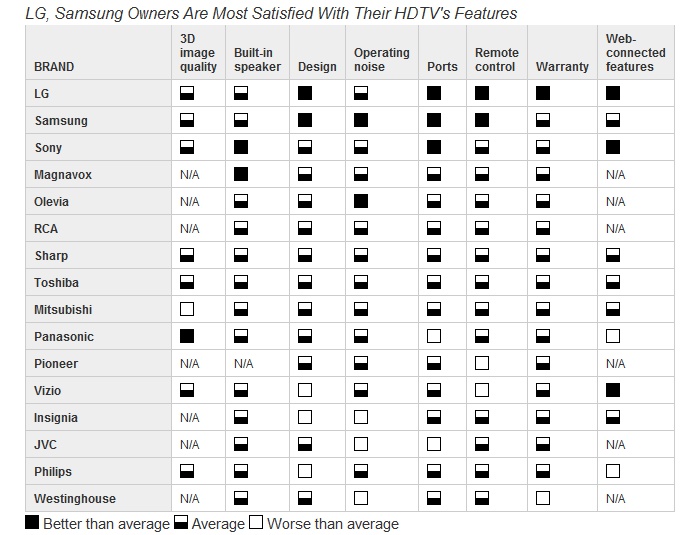