Microsoft announced this week that it has officially launched has the first major software update to its Windows Phone platform, formerly known as the codename "Mango" but now simply called Windows Phone 7.5. Although its officially been released, not all phones will get the update straight away.

Windows Phone 7.5 Mango goes a long way to addressing the concerns we had with the original version. Microsoft claims it has added or improved over 500 features. While hundreds of these are minor changes that many people won't even notice, there are a few big changes and most of them are positive.

When will you get it?

If you own one of the six Windows Phones sold in Australia — the HTC 7 Trophy, HTC 7 Mozart, HTC HD7, Samsung Omnia 7, LG Optimus 7Q or the LG Optimus 7 — you will receive the Mango update in the next few weeks. However, as posted on The Windows Phone blog, the update will not be pushed out simultaneously to all phones.

"We're not making Mango available to everyone at once. So it could be a few weeks before an update message for Windows Phone 7.5 appears on your phone," wrote Eric Hautala, Microsoft's general manager of customer experience engineering for Windows Phone. "Delivering Windows Phone 7.5 simultaneously to so many phone models and carriers requires the right engineering balance. Speed is a priority - but so is quality. We’re not just delivering our new operating system but also new software supplied by individual handset makers."

"If a problem comes to light, it's critical that we can isolate and fix it quickly. So we're deliberately starting out slow," he continued. "This week, we'll be making the update available to 10 percent of customers. If everything looks good, we'll open up the spigot a bit more - to around 25 percent. We'll hold there for one or two weeks, then quickly ramp up to 100 percent - monitoring quality the entire way".

What the carriers say

We contacted Australian carriers who sell Windows Phones — Telstra, Optus and Vodafone — to find out when Australian users will receive the 7.5 Mango update. Here's what they had to say:

Updates for Telstra customers with a HTC HD7, HTC 7 Mozart or LG Optimus 7Q started rolling out this week but specific timing is not known. Telstra spokesperson Peter Symons referred to the fact that Microsoft is releasing it progressively starting with 10 per cent of customers. Telstra has updated the to indicate the 7.5 "Mango" update is available, but notes that Microsoft is rolling it out progressively.

Updates for Optus customers with a Samsung Omnia 7 or an LG Optimus 7 are "coming soon". We contacted Optus to find out more details around timing, but as yet have not received a response besides "we are just checking on this now". We will update this article with any relevant information as it comes to hand. 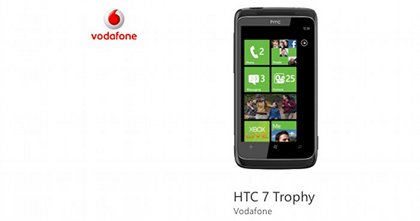 Vodafone sells just a single Windows Phone handset in Australia: the HTC 7 Trophy. We contacted Vodafone to find out when customers with the 7 Trophy will receive the Mango update, but as yet have not received a response. We will update this article with any relevant information as it comes to hand.

Have you already received the Windows Phone 7.5 Mango update? Let us know in the comments section below!