It seems a new Android tablet is launched or announced almost every week, however most of them are very similar. Two products that are at least trying to offer something different are the ASUS Eee Pad Transformer and the Lenovo ThinkPad Tablet. Both tablets attempt to add some variety to the market by the availability of an optional keyboard dock that adds extra functionality, along with a few other key features that may endear them to business users rather than consumers.

The ASUS Eee Pad Transformer and the Lenovo ThinkPad Tablet both run the same software, so the end user experience will be almost identical. The Eee Pad Transformer originally shipped with the 3.0 version of Google's "Honeycomb" version of Android but is currently in the process of being updated to the latest 3.1 version of Google's "Honeycomb" version of Android. The Eee Pad Transformer received the 3.1 software update over-the-air during our review period. The Lenovo ThinkPad Tablet on the other hand will ship with 3.1 as standard. Android 3.1 brings improved UI transitions, an expandable and scrollable recent apps menu, and resizable home screen widgets, along with improvements to the standard Web browser, calendar, e-mail and gallery apps.

The software on both the ASUS Eee Pad Transformer and the Lenovo ThinkPad Tablet is largely a 'vanilla' version of the Honeycomb OS, though ASUS includes its Waveshare UI on the Eee Pad Transformer. Additions include a file manager, a MyCloud storage app, a MyLibrary books app, and a MyNet app for streaming multimedia content via DLNA. The MyCloud app offers one year of unlimited cloud storage. ASUS also includes handy e-mail, clock and weather widgets, though we found these made scrolling through home screens sluggish and choppy.

By comparison, Lenovo includes its "Launch Zone" software on the ThinkPad tablet, which is basically a fancy name for its UI overlay. The software includes five customisable zones for reading, listening watching, e-mail and the Web. Lenovo will also include 2GB of free cloud storage with every ThinkPad Tablet sold.

As a standalone device, the Eee Pad Transformer has textured plastic on the rear which makes it easy to grip. However, the plastic does exhibit a bit of flex when pressed, and the bezel surrounding the display seems a little large. At 271mm in length, the Eee Pad Transformer is a pretty large device. Weighing 680g, it's heavier than the upcoming, featherweight Samsung Galaxy Tab 10.1v, but lighter than the Lenovo ThinkPad Tablet. The ASUS Eee Pad Transformer obviously gets its name from the optional keyboard dock, but the tablet can be purchased without the keyboard dock for $599 in Australia. 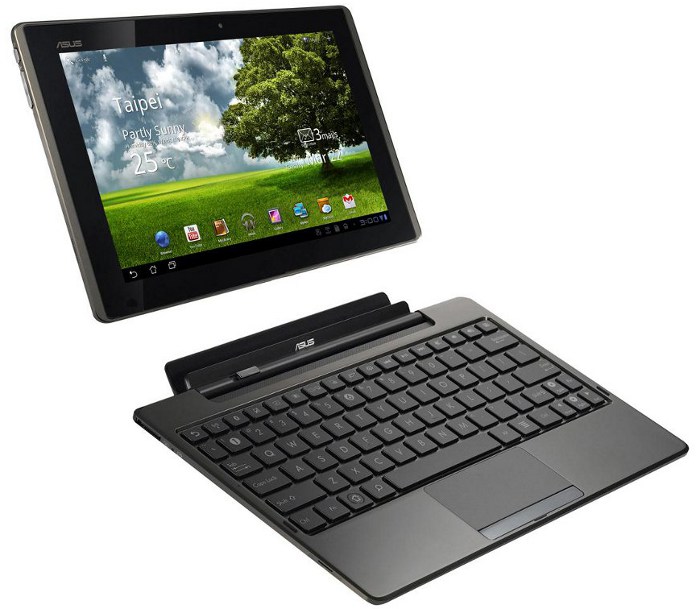 The ASUS Eee Pad Transformer's keyboard dock has two full-sized USB ports, an SD card slot and a trackpad, as well as its own built-in battery. ASUS says the battery offers an additional six and half hours of use.