If you've got a library of downloaded videos and want to play them on your smartphone or tablet, you might find out they're the wrong file type. Some tablets and phones can only play specific file types, and only a few devices support high definition files.

The easiest thing you can do to get these files playing is to transcode them to a different file type and resolution that matches your device. Our software of choice for this purpose is Handbrake — it's a lightweight, powerful and very easy to use video transcoder that works on Mac OS X, all flavours of Windows, and Linux.

You can find the right version of Handbrake for your system here, at the Handbrake Web site — it's available for any Mac OS X machine running Leopard or newer, Windows XP onwards, and Fedora or Ubuntu Linux. It's entirely free because it's open source, and is built and maintained by a dedicated crew of volunteers. They don't even want your donations.

Handbrake isn't for ripping video from DVDs — it doesn't have the right tools to do that. If you have downloaded video (like a movie trailer, or a free movie or TV show) that has no DRM or file protection, you can use Handbrake to convert it from one file type to another. It's perfect for changing the encoding of downloaded high definition video and compressing it to suit a portable device like a smartphone or tablet.

The install process is a breeze and only takes a few minutes — it's a very lightweight piece of software and doesn't require any additional codec downloads. Just drag Handbrake into your Applications folder and click to start it up (on Mac), or run through the installer and find the shortcut in your Start Menu (on PC). 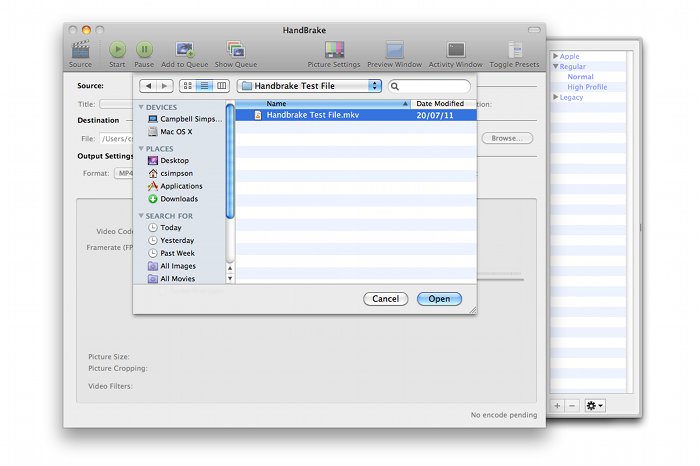 When you open Handbrake, it asks you to select a video file or files to transcode. You don't have to select one now, but feel free.

Handbrake accepts importing almost any kind of video file, and can output to either MP4 or MKV. We generally use MP4 because it's supported on both Android and Apple smartphones and tablets, but check your device's specifications to see what it can play. Many downloaded videos from the internet are in MKV containers, making transcoding necessary for portable device use. 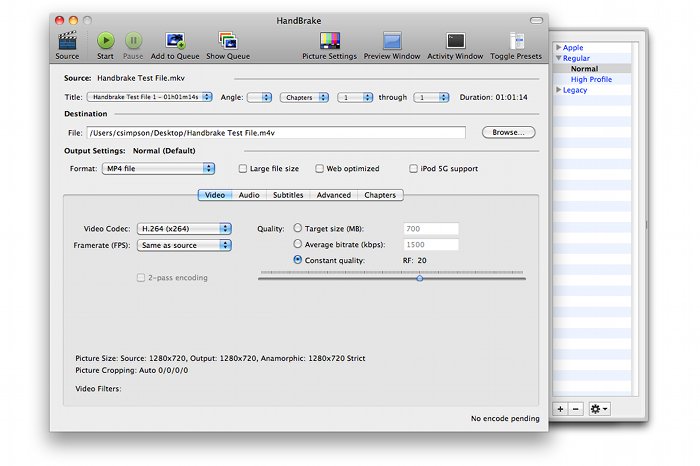 The main interface of Handbrake has a bundle of options available, but you don't need most of them.

Handbrake's interface may look a little daunting, but don't worry. Unless you want to make very specific changes to your video files, you can ignore almost all of it. If you've got any complicated needs, we suggest you take a look at the Handbrake Wiki or the user manual.

The main task is a one-time thing — you'll want to create a couple of profiles that will tailor your video files to the correct resolution for the screen size of your tablet or smartphone. Apple users are well cared for with Handbrake's defaults. There are a host of presets for the iPad, iPhone 4 and iPhone 3GS/iPod touch video playback, with tailored resolutions and quality settings. If you've got an Android tablet or another device, you'll need to do a tiny bit of customising. 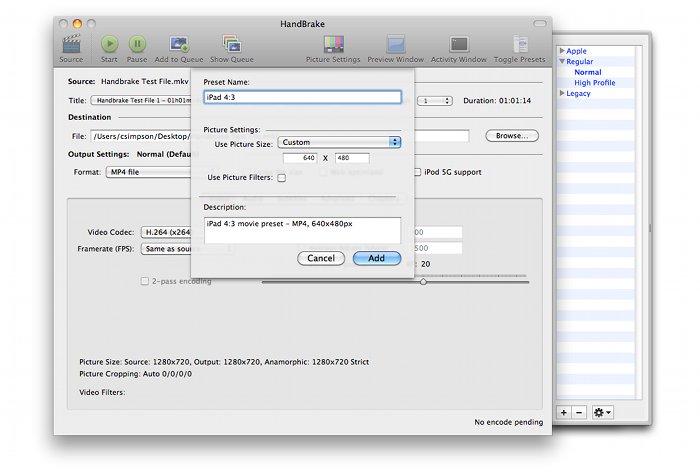 Clicking the little + button on the presets window (on the right) brings up a box to create a new preset. Select Custom picture size and enter your device's screen dimensions, keeping to either the 16:9 or 4:3 ratio. 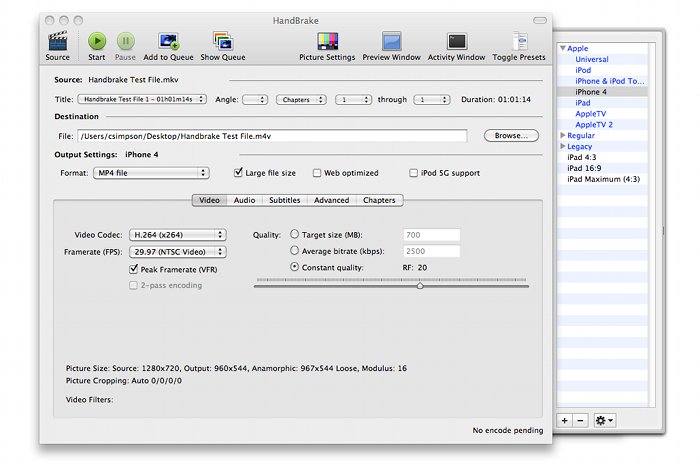 We made a few presets to make switching between video sizes easy, but if you've got an Apple device Handbrake already has some presets to suit you.

If you've got a large Android tablet like the Samsung Galaxy Tab 10.1v, the Toshiba AT100, the Motorola Xoom, the Acer Iconia A500 or the ASUS Eee Pad Transformer (which all have a 10.1in screen with a 1280x800 resolution), you'll want to set a maximum video width of 1280pixels. Smaller 7in tablets like the Blackberry Playbook and the original Samsung Galaxy Tab have lower screen resolutions, so set a maximum video width of 1024pixels for these devices. Check the resolution of your tablet or smartphone's screen and work off this.

We think you should make two profiles: one for widescreen video (the most common) which has an aspect ratio of 16:9, and one for standard video (becoming more rare these days) which has an aspect ratio of 4:3. This requires a bit of maths — for example, a 16:9 file with a 1280pixel width will have a 720pixel height. That same file in 4:3 ratio would be 960pixels tall. This step isn't mandatory, but it will mean video looks as good as possible and won't make your tablet work too hard to play the file. 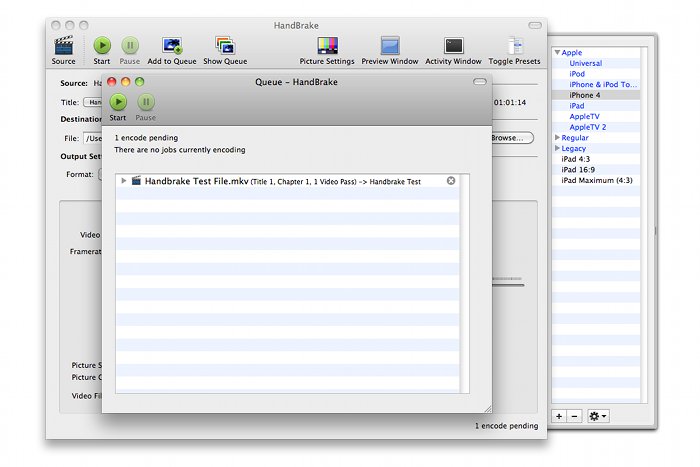 The Queue window lets you make sure you've got everything set up and ordered correctly before you start converting. 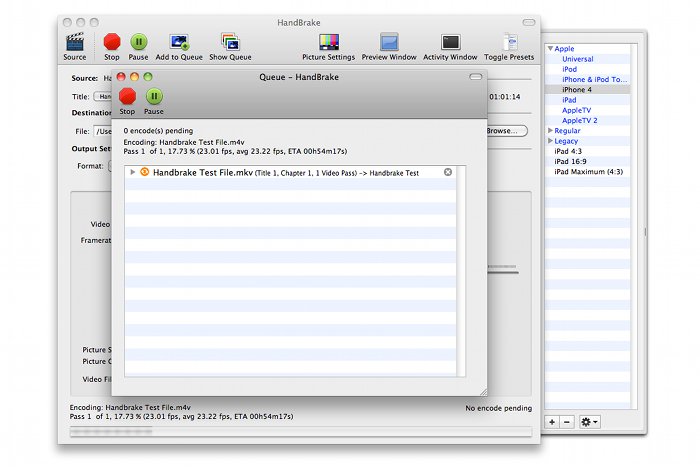 The Handbrake conversion process takes quite a while, so go and relax with a drink or three.

Once you've created a couple of profiles to suit your tablet or smartphone, the rest of the procedure is simple. Just select the video file or files you want to transcode (if you haven't already), click the Add To Queue button and the Show Queue button to make sure you've got everything set and ready to go, and then hit Start. Sit back and relax, because transcoding is processor intensive and takes a fair while to complete. On the reasonably powerful MacBook Pro we used — a 2010 model, with a dual-core 2.4GHz Intel Core i5 CPU, 8GB of RAM and a 120GB solid-state drive — transcoding a 61min 720p high-definition video from MKV to MP4 took around 70min in total. 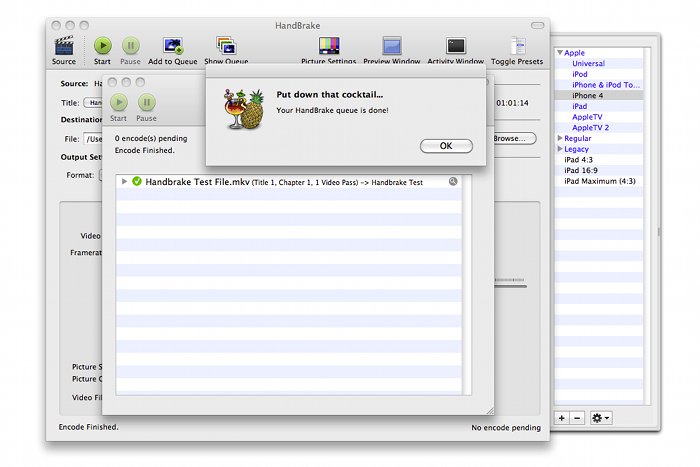 Once the file conversion has been completed, a new file will appear (by default on the Desktop, but you can select a specific location). After that, you're ready to transfer it and watch it!

The process notifies you when it's finished. All that's left for you to do is transfer the file to your tablet or smartphone. 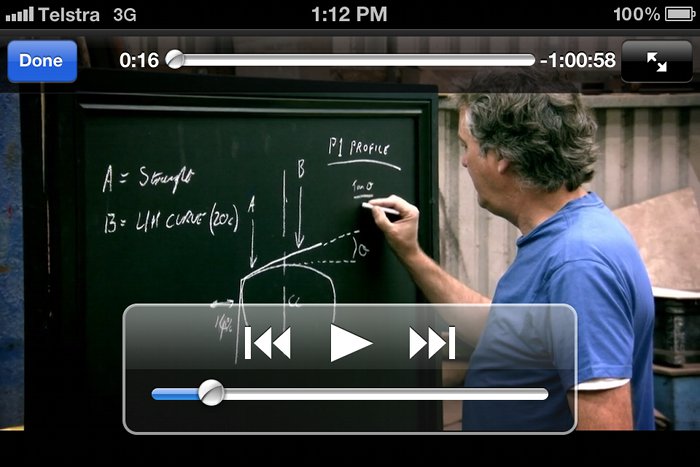 We gave our Handbrake conversion a test run on an iPhone 4, with perfect results.