The XPERIA Arc includes Sony Ericsson's Timescape application, which first appeared on the XPERIA X10 Android phone. Timescape groups social networking and phone communications into a single, graphically intense interface; each communication event on the phone forms a 3D box that you simply flick your finger up and down the "spine" to scroll through. However, Sony Ericsson has included Timescape as a regular app rather than integrate it into the XPERIA Arc's UI, and it has also dumped its Mediascape integration. This means the XPERIA Arc is unlikely to suffer the same Android software update delays as the XPERIA X10 did.

Though the streamlined iPhone experience has won many fans, Apple's closed platform means the iPhone 4 doesn't offer the same flexibility as smartphones like the Sony XPERIA Arc. The iPhone has an inferior notification system to Android phones, and it doesn't let you customise and display live widgets on your home screen. By the same token, the iPhone interface and overall user experience are far more polished than what is currently on offer from Android phones.

The Sony Ericsson XPERIA Arc Android phone comes with an HDMI port, meaning you can connect it directly to a high definition television. Along with DLNA connectivity for wirelessly sharing media content, the XPERIA Arc seems well designed for multimedia sharing. 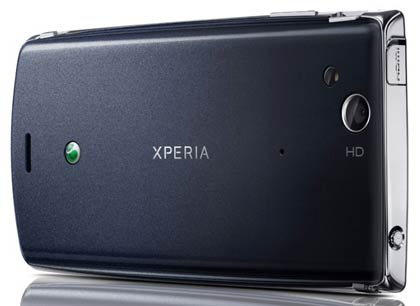 The iPhone 4 can't boast HDMI connectivity, but its camera is widely regarded as one of the best on a smartphone, surpassed only by the superb 12-megapixel Nokia N8. The Sony Ericsson XPERIA Arc is powered by a 1GHz Snapdragon processor, has 512MB of RAM and comes with a microSD card slot for extra storage. Strangely, Sony Ericsson has only provided a paltry 320MB of internal memory.

What do you think about the Sony Ericsson XPERIA Arc and the Apple iPhone 4? Tell us in the comments below!