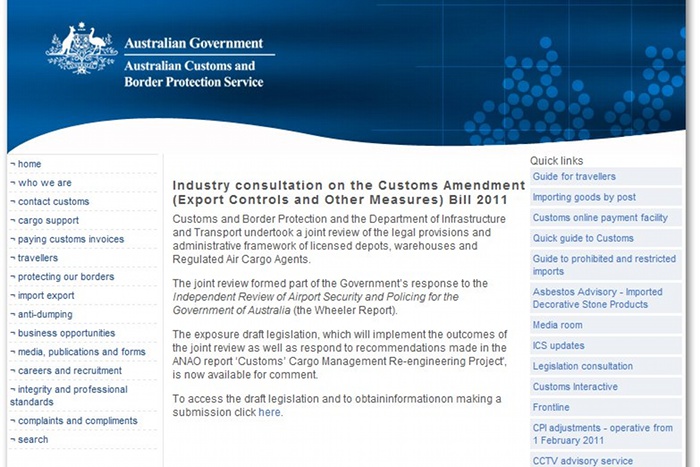 A document from the Australian Customs and Border Protection Service from late January details a three month campaign to crack-down on expensive parcels entering Australia marked as gifts or with a declared value under $1000, exempting them from liability for GST or duty payments. The document notes that the campaign aims to ensure that GST and duty exemptions for low-value goods entering Australia are not being "abused or exploited" by importers.

The operation, which started at the beginning of 2011, involves Customs officers performing an increased number of examinations of international mail. In addition, the declarations of air and sea cargo will be more stringently checked. With the increasing popularity of online shopping and eBay purchases from outside Australia, it is a common practice for expensive internationally shipped items from some regions to be marked as gifts, samples, or declared with a low value to avoid the $1000 GST threshold that applies in Australia. Packages that exceed this threshold require an additional 10 per cent goods and services duty payment on the value of the items, as well as Customs processing fees, before being released to the purchaser.

This crackdown comes soon after a consortium of Australian retailers called for the abolition of the GST exemption for goods under $1000 entering Australia, citing falling profits due to competitive online pricing from international stores. Similar or identical items to those available in large Australian retailers like Harvey Norman, David Jones and Myer can be purchased from online stores in Asia, USA and Europe for prices that are often 20 to 50 per cent cheaper. Electronics items are a common purchase in international online stores, with digital cameras, PC components and home entertainment products popular choices.

The Australian government will hold an online retail forum with retailers in late February to educate them on online shopping. Retailers were chastised earlier in the year by Prime Minister Julia Gillard, who said that Australians who shopped online should not be prevented from doing so. The Prime Minister, along with experts, said that abolishing the GST on goods under $1000 would cost more in administration than would be recovered in revenue.

Currently, if a package is detained by Customs and is assessed to have a value of over $1000 without supporting documentation being supplied, it will be held and a notification will be sent to the addressee via Australia Post.

Read more: ​3 ways to improve your sales this Mother’s Day