Research in Motion (RIM), makers of BlackBerry smartphones, recently unveiled the "enterprise-ready" 7in touchscreen BlackBerry Playbook tablet, which is set to go head to head with the Apple iPad.

RIM has not confirmed an Australian launch date for the BlackBerry PlayBook tablet, or how much it will cost when it arrives down under in the second quarter of 2011. The PlayBook will be targeted at users who want to browse the Web, view multimedia and read electronic books, newspapers and magazines. It has been described by RIM as "the world's first professional-grade tablet". 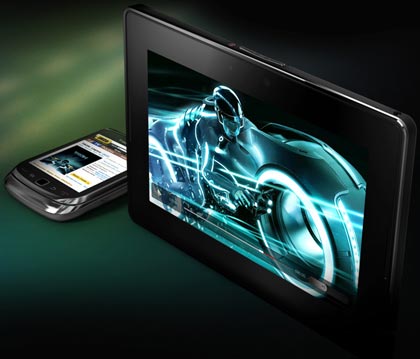 Unlike tablets like the iPad and the Samsung Galaxy S, the BlackBerry PlayBook will require users to pair with a BlackBerry smartphone for 3G connectivity.

With this in mind, how does the BlackBerry PlayBook stack up against the Apple iPad?

While RIM hasn't revealed the BlackBerry PlayBook's full specifications, we do know that it is running a 1GHz processor, has a hefty 1GB of RAM and like the iPad will come in 16GB, 32GB and 64GB models. Unlike the iPad, the BlackBerry PlayBook will also have dual cameras; a 5-megapixel camera on the rear for still photos and video recording, and a 3-megapixel camera on the front which will allow video conferencing. The PlayBook will also support Full HD 1080p video recording.