Last month we were able to sit down with the team at Microsoft's mobile division and receive an in-depth demonstration of the company's new mobile operating system, Windows Phone 7.

Windows Phone 7 is a completely new mobile operating system, built from the ground up and not resembling its clunky predecessor, Windows Mobile 6.5, in the slightest. After just a few minutes playing with a fully functional Windows Phone 7 device, we were left impressed.

The user interface of Microsoft Windows Phone 7 is completely different to anything currently on the market. It's made up of large tiles that can be organised in any way you wish; tiles can be "pinned" to the home screen, and the default tiles can be removed. You can simply press and hold a tile to move it around the screen. The tiles offer a refreshing look and feel, with large text and live images. For example, the "People" tile — a centralised hub for multiple forms of communication with contacts — will display live photos of the last few people you've interacted with. There's no limit to the number of tiles you can pin to the home screen, so it can be as long or as short as you want. 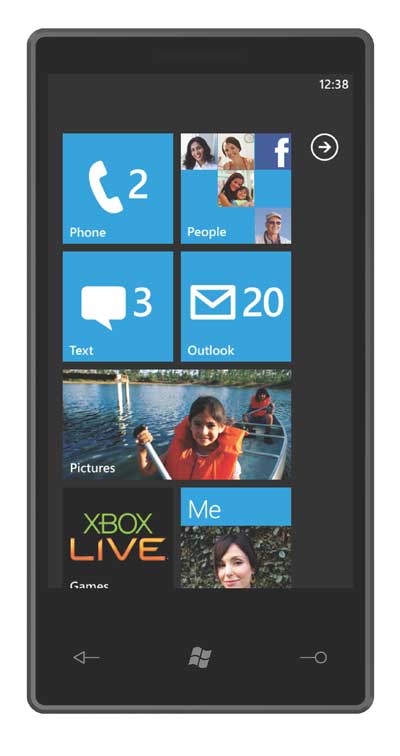 The Windows Phone 7 home screen is made up of large tiles.

Once you open one of Windows Phone 7's default "hubs" (People, Pictures, Games, Music, Video, Marketplace, Office), the UI utilises a panorama-style view. Slide left and right to browse through the panorama; for example, the People hub consists of a list of those you've had recent contact with, all of your contacts and a What's New list that integrates real-time Facebook and Windows Live updates.

One thing we noticed was how smooth the entire experience is. Whether it is scrolling through tiles on the home screen, opening applications, or performing basic tasks such as dialling a phone number or typing a text message, the interface feels fresh, zippy and completely natural. It's a completely the opposite experience to using previous Windows phones, which were often rightly accused of having clunky, lag-ridden interfaces. The Windows Phone 7 UI even makes the iPhone and Google Android interfaces feel slightly dated. 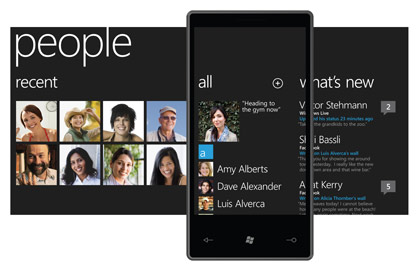 The Windows Phone 7 "People" hub. All hubs utilise a panorama view; slide left and right to browse through the panorama on the phone.

The on-screen keyboard is excellent. We found it more comfortable and accurate in landscape mode, but it works well in portrait mode too. The keys are well spaced and make a soothing clicking sound when pressed, while the built-in spell corrector allows you to tap on a word to bring up a list of suggested words.

Instead of a regular contact list, Microsoft has gone the whole hog and opted for an optimised "People" hub. You simply enter your Facebook, Windows Live ID and other e-mail accounts (the OS naturally supports Microsoft Exchange e-mail) and it automatically grabs your contact list and keeps them updated in real time. Conveniently, you can choose to add all your Facebook contacts to your people hub, or simply add Facebook info for the existing contacts you already have. Facebook status updates, e-mails, calls, messages and IMs all appear in this single People hub, and you can also pin the tile of an individual to your home screen for quick access.

Being a Windows Phone, the OS naturally comes with the full OneNote Office mobile suite, including applications to create, view and edit Word, Excel and PowerPoint documents. 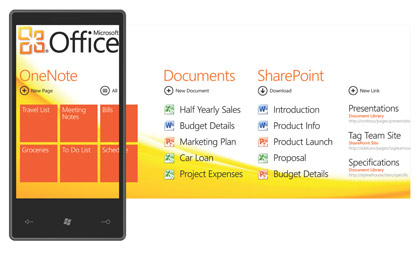 Despite all the positives, there are a number of issues with Windows Phone 7, headed by the lack of a copy and paste function. We expect this to eventually be added, but it is definitely a disappointing omission.

Windows Phone 7 also has no support for third-party app multitasking — Microsoft says that the reason for this is to preserve performance. (This is something that the company is all too familiar with considering it was a huge issue in Windows Mobile 6.5) While we can understand the reasoning, it remains disappointing.

One omission that is definitely not understandable is the lack of integrated Twitter support. The social-networking site is extremely popular and many Google Android smartphones have integrated Twitter access, including HTC's Sense UI (as seen on the HTC Desire and HTC Wildfire smartphones). Twitter seems like a perfect fit for Windows Phone 7's People hub, so we're not sure why it hasn't been included. 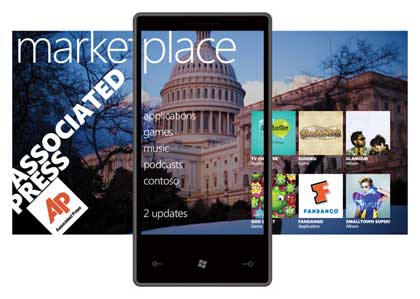 Windows Phone 7 features the Marketplace for mobile apps, but there is no support for multitasking when it comes to third-party apps.

Microsoft Windows Phone 7 devices are expected to hit the shelves before Christmas, possibly as soon as October. Are you tempted to switch from your iPhone, Android or BlackBerry smartphone? Let us know what you think of Windows Phone 7 in the comments below.