WeTab will next week release the world's first tablet based on the MeeGo operating system. At the Intel Developer Forum in San Francisco, WeTab showed off the device, which boasts a boot-up time of only 16sec along with a stand-by recovery time of 1sec.

The announcement comes hot on the heels of the opening of the new AppUp store, which sells applications for Windows 7- and MeeGo-based products that use Intel Atom CPUs. The WeTab features an Intel Atom N450 CPU and 1GB of RAM, and it can be configured with either 16GB or 32GB of storage space. It also has an SDHC expansion slot. The tablet interface can be manipulated with both hands via its 11.6in multitouch screen. You can find more details on the WeTab at the vendor's Web site. 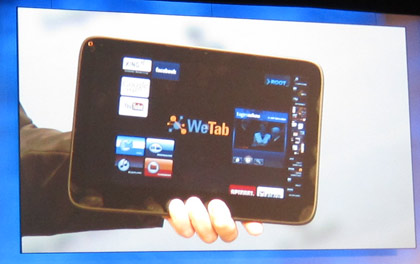 The WeTab in action at IDF.

The WeTab is one of many Atom-based MeeGo devices that will become available. Netbooks, nettops and phones will also run the operating system. In a roundtable session at the Intel Developer Forum, Intel's Renee James, senior vice president and general manager, Intel Software and Services Group, reiterated that Intel is not trying to compete with Microsoft in the desktop operating system space, saying there was no point. She said the MeeGo is "perfect for netbooks", but that it's not designed to run on regular notebooks and desktop PCs, even if it can.