Dell showed off a 10in tablet PC with a difference at the day two keynote of the Intel Developer Forum in San Francisco.

Based on an Intel Atom dual-core CPU and running Windows 7 Premium, the crowd was almost bored at the slightly bulky looking product while a member of Dell's Ultramobile Products team showed off run-of-the-mill music streaming and photo viewing tasks. It wasn't until the unit was transformed into a laptop-like form factor that the crowed "ooh'd" and "ahh'd". 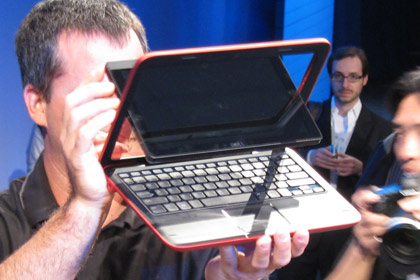 The tablet has a built-in keyboard that is located underneath the screen when it's in tablet mode. To expose the keyboard, the screen has to be lifted and then flipped. In addition to a keyboard, you also get a built-in touchpad, which essentially turns the tablet into a netbook.

Because it runs a full version of Windows 7 and has a physical keyboard, the Dell tablet is essentially a laptop in a different guise and is useful for productivity applications in addition to Web browsing and media playback. The dual-core Atom CPU gives the unit enough power to run multimedia applications and games, and this was showcased during the demo.

Dell says the new tablet will be available later this year.