Game designers Dmitry Kosinov and Mikhail Platov discuss what it's like working on a "Zero Player Game," inspiration from Terry Pratchet, and balancing family life with game development.

A few weeks ago we reviewed Godville, a text-heavy mmo of sorts that purports itself to be a "Zero Player Game." Dmitry Kosinov and Mikhail Platov, the creators of Godville, were kind enough to speak to us about the game.

GamePro: Can you talk about what your specific roles are on the Godville team?

Mikhail Platov: Dmitry Kosinov and I are the "regular" Godville development team that messes with the servers, deals with the code, moderates forums and talks with players on a daily basis. I mostly take care of the technical part, while Dmitry deals with gameplay-related issues. But it's worth noting that Godville would have never become what it is today without tremendous help from its community of players, which we truly consider to be a part of our "Global Team," although it's a bit virtual. Since the early days, we've read numerous ideas and feedback from players, to make decisions about what direction the game should go and which features to add next. Needless to say, most of the phrases in the game are suggested (and later voted on) by players themselves.

GP: Can you go into the history of creating Godville? How did this project get started?

Dmitry Kosinov: Way back in 2003, we discovered Progress Quest -- a small and simple "Zero Player Game" that we immediately loved. In the next several years, we slowly nurtured various ideas while running day-to-day errands, and in 2007 we finally felt ready to give this idea a try. We decided to make our own ZPG, but better [than the other ones available]. One of the inspirations for Godville was Terry Pratchett's book "Small Gods." In fact, in Godville you are a "small god," you have your very own infidel. Your influence is limited to the little things you can do, like encouraging, punishing and sending voices that your champion might obey. There were also some other things that we wanted to do differently. It was 2007 and having a desktop app was not considered sexy. The iPhone was not popular yet, but web [development] was already hot, so we decided to make it for the browser. All we had was just a vague idea, so to make things easier we decided to make it in Russian -- because it's our mother-tongue and it was naturally easier for us to write jokes in Russian -- even though our very first prototype was in English. After a couple months Godville.net was born.

GP: How did the project get from that point to where it is now?

DK: The initial version was very different from what it is today and, frankly, it was barely playable. But in the next 3 years Godville slowly transformed from several thousand lines of spaghetti-code, written over couple of weekends, into a bigger and more solid game played by several thousands of players, with it's own newspaper, wiki, and mobile clients for iPhone, Android and J2ME. We never really advertised ourselves, it was just people discovering the game and then telling their friends about it, writing about it on the internet, and bringing in more people. Some of them didn't really get the idea and probably went away after 5 minutes of looking around, but the ones who really enjoyed it have stayed with us until today. 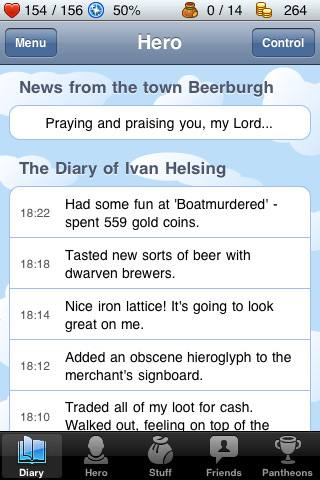 GP: When did you start work on the English version?

MP: Several months ago we thought it would be fun to go back to the start and make an English version again. Moreover, from time to time we were approached by our players, with the question of whether we planned to make an English version, so they can show it to their English-speaking friends. We found some folks in the Russian community who liked this idea and were willing to help with the initial translation, and a couple months later GodvilleGame.com went live. GG is still a work in progress in term of both features (there is no newspaper, no wiki, no pets, PvP fights are somewhat limited, etc) and the set of in-game items and phrases. It's certainly smaller than we want it to be, but luckily, things are getting better. New texts, monsters and artifacts are added almost on a daily basis, and once in several weeks we'll be making bigger changes, like we did for godville.net for the past 3 years. Frankly, the iPhone app was one of those features in our list and it's certainly not going to be the last one. We have lots of our own ideas and we receive a constant flow of various thoughts from our players, so we'll probably find something to keep them engaged.

GP: Why did you guys decide to name the game Godville? In America, many games with "ville" in the name are clones of Zynga's Farmville. Since Godville is nothing like that game, it seems like a strange choice for a title.

DK: Back in 2007 when we released our first version, there was no FarmVille or other "ville" games. I'm not sure if Zynga existed back then. We chose this name mainly for two reasons: it explains the idea of the game and it just sounds good in both Russian and English. We think that our name choice turned out to be a good one -- at least there is one "ville" game in 2010 that you can enjoy without being sucked into it.

GP: What will some of the first updates to the iPhone app bring?

MP: The first update available in the AppStore mostly address the issues users reported in the first few days. Besides big fixes, there was a little bit of polish as well. There's an improved control page and status bar to provide better feedback on actions and a reduced number of taps that player needs to make. Also, there's a new option to submit phrases, items and other stuff simply by tapping on existing text. The second update became available just recently, and it addressed the issues with occasional text cut-offs and improved diary updates on multi-tasking enabled devices.

GP: How soon can we hope to see these improvements?

MP: As for the bugfixes, we tend to release them as fast as we can. Up until now the Russian version was updated approximately 1-2 times per month. It's also worth noting that all the hero's adventures are stored on our servers, and those may be updated several times per day with changes going live immediately. This way you can see new stuff in the diary, inventory, etc., without waiting for the new version of the app. Also, some features might be added without updating the app.

Probably the most anticipated and exciting feature we're going to add in the next few weeks is the Arena. Gods will have a way to send their heroes to the Arena, where they will fight each other in the name of their god for a small reward. Like everything else in Godville, fights will be totally autonomous, but with a little bit of interference from a god if one wants to. It's a whole new way of having fun and from our experience with the Russian version of Godville people are really going to like it.

GP: The Godville app for iPhone is free. Are there plans to make the game into a pay service or will it always be a non-profit ordeal?

DK: From what we've seen so far, people are saying the app's totally worth $0.99 or $1.99. We don't want to charge for it yet, but we'll probably add some in-app purchases later to help ourselves cover the expenses. But we want to keep the app itself free.

GP: How successful has the iPhone version been?

DK: Thanks to reviews, we have more people playing than we initially expected. As of today, we're at well over twenty-thousand downloads and counting.

GP: Any plans to bring the game to iPad?

DK: Thanks to reviews, Yes, there will probably be an iPad version eventually.

GP: I'm assuming that both of you have jobs outside of Godville, since it doesn't seem to be ad-supported. How do you balance working on the game and family life/work?

MP: Godville has never been ad-supported and we hope it will never be. There are way too many places with ads on the Internet already, and we want our place to be Ad-free. Early on Godville was like a hobby to us, and we both had "normal" jobs. However, some time ago, things changed for me a bit and suddenly Godville had more resources available. This is probably the reason why Godville-global appeared sooner than expected. And as for balancing work and life, our formula is very simple: all time left after work and family goes to Godville.