Keeping mobile phones and other portable electronics charged is a hassle if you make frequent business trips or work in multiple locations. Inevitably, your smartphone's battery dies far from a power source just when you need to make a crucial call or get directions to a meeting.

A portable charger that harnesses and stores solar, wind, or motion power could keep you in touch. Devices that power cell phones, GPS devices, digital cameras, MP3 players, e-book readers, and other electronics have come to market in recent years as "green" consumer products, but their usefulness for work has rarely been addressed.

To gauge their usefulness, we put several off-grid chargers through a series of informal, hands-on tests.

The US$49 Hymini from Miniwiz uses a tiny turbine to charge "most 5V handheld devices." It's likely to arouse the curiosity of clients and coworkers if you use it around them.

The Hymini fits in the palm of your hand or on a windowsill, but its comma shape is impractical. When we laid the device flat, its tiny turbine struggled to pick up enough wind to spin, and there's no stand to prop the unit up with. When we used a strip of Velcro tape to attach the lightweight Hymini to an outdoor wall, however, its fan spun easily.

To get started, you'll need to fill up the Hymini's 1200-milliampere-hour lithium-ion polymer battery; the accompanying directions recommend doing this the first time via an AC wall outlet. In our tests, the initial charging took about 4 hours. Once you leave the office, you can replenish the charge in winds of 9 to 40 miles per hour--but since there's no wind speed indicator, determining whether the wind is suitable for recharghing is a matter of guesswork. 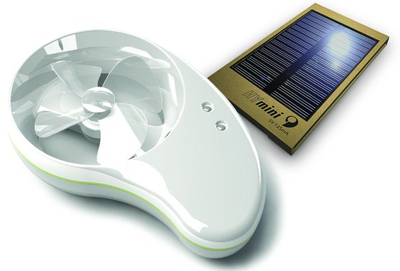 As long as the battery indicator light glows green, the Hymni battery is full of power. Unfortunately, there's no way to tell how much power remains, or how quickly the unit is draining. Once the light dies, charging the Hymini by wind power alone is not recommended, and in practice it tends to fall over too easily to be useful. We took it out on a sailboat in 20-knot winds and couldn't keep it upright long enough to charge anything.

While the Hymini is receiving a charge, a red light on the side lights up. You must remember to slide a switch to the battery icon during charging, and to slide the switch to off when you aren't using the Hymini. Sliding the switch to the lightbulb icon turns on a two-light LED flashlight atop the device.

Unlike other off-grid chargers, the Hymini comes with a handful of adapter tips labeled for LG, Sony Ericsson, Samsung, and Motorola phones. Also included are a retractable USB cable and adapter for powering the Hymini from a computer. The USB cables that came with RIM BlackBerrry, iPod Touch, Amazon Kindle, and HTC Droid Incredible worked as well.

It took about an hour to charge a dead BlackBerry Bold from the wall-charged Hymini. After that, however, attaching a drained HTC Droid Incredible to the Hymini for an hour didn't provide enough power to permit a single phone call. Even after the Hymini spun outdoors for 5 more hours, it had too little juice when connected to a Kindle or to an iPod Touch to cause their charging indicators to register a connection.

In the end, the Hymini worked great when it was charged from the wall, but provided anemic results when serving its actual purpose of providing stored wind energy to electronics. If the Hymini isn't practical as a reliable, off-grid power source, at least it would make a cool toy to demonstrate the possibilities of renewable energy for children. 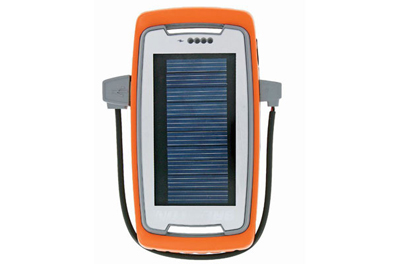 The waterproof, 5.7-ounce, gray-and-orange Brunton Freedom solar charger feels simple and rugged, a good option for people who do "dirty" work outdoors. You could safely leave the US$69, rubberized device face-up on a slippery table, on the dashboard of your car, or in the rain. It can attach to and hang from a hook, but there's no built-in stand to position the Brunton Freedom at an optimal angle to catch the sun's rays.

The Freedom is built to charge 5-volt electronic devices, including smartphones, GPS devices, MP3 players, and cameras. But with only the USB cable provided--and no options for adapters on the Brunton Website--its range of applicability is limited. (On the other hand, adapters and a USB transfer cable provided in the Hymini wind charger package seemed to work with the Brunton device as well.) At least the Freedom, unlike competitive products, came with a 12-volt USB adapter to plug in to a car's cigarette lighter.

Though you have to turn on the Freedom before you can use it as a charger, you don't have to mess with any switches or modes. One button controls a small, built-in flashlight, and another button switches on the power and lets you check the status of the 2200mAh lithium-ion polymer battery. When you press a button along the left edge, four LEDs indicate a full battery. The LEDs fade one by one as the power drains, so you can tell when it's time to do a solar refill. A lightning-bolt icon flashes green while the Brunton Freedom powers up. A gray cable connects a mini-USB and a USB port on either side of the device and nestles into its body, so it's hard to lose.

Like the Hymini, the Freedom comes with directions that recommend charging first from a wall or PC USB outlet rather than starting from scratch with the sun. After being plugged into a wall outlet for close to 3 hours and becoming fully powered, the Freedom took an hour to charge a BlackBerry Bold, after which it showed its battery drained to zero LEDs. The device automatically shut off whenever it ran out of power or finished charging.

On an overcast San Francisco day, the Freedom took about an hour outdoors to bring each blue LED to life--roughly 4 hours to fill a near-empty battery. When it was fully solar-charged, it took roughly an hour each to charge an HTC Droid Incredible and an iPod Touch. When the Freedom displayed just one or two LED indicators, however, none of the connected devices appeared to receive energy from it.

This sturdy device is relatively simple to use out of the box without heavy effort, and its helpful power indicator levels make it more practical and painless to use than other chargers. Furthermore, collecting solar energy seemed less of a struggle for the Freedom than gathering wind energy was for the Hymini. Unfortunately, the Freedom isn't alone in seeming to need a full charge in order to give a lift to other devices.