Politicians, pundits and plebs have more ways to follow the lead-up to and aftermath of the federal election through social media and other online services than ever before. We've rounded some of the best ways to follow the election without leaving the comfort of your computer chair. Most of these services can also be accessed from your mobile phone, so you can keep informed on the go. 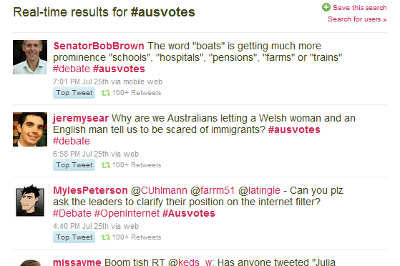 Twitter is the go-to tool for keeping up with the election. While other Web sites are updated quickly when news breaks, the microblogging service's up-to-the-second coverage can't be beaten. The best way of following election ructions is to watch a hashtag like #ausvotes. This is the most popular hashtag being used for the 2010 election, but you might also find extra info with other tags like #electionWIRE. Whenever there's an event, the Twittersphere will often coin a new hashtag for it — as an example, the leaders' debate on July 25 was largely tweeted under the #ausdebate and #debate tags.

If constantly checking on hashtags is a bit much for you, then we'd suggest cherry-picking some top Australian political journalists (and politicians, if you dare) to follow. We'd suggest these key figures:

This definitely isn't an exhaustive list, but it's a good place to start if you're keen on following political events on Twitter. 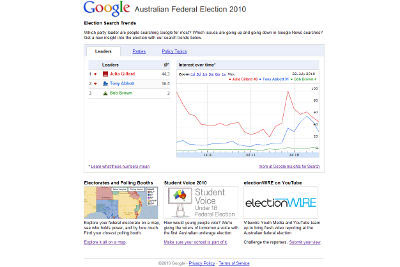 The Google Election 2010 Web site is a great resource if you want to find out what political search terms everyone's keen on. An interactive graph shows search trends over time for political leaders, major parties and policies, so you can discover what issues are important to other Australians. Google Election 2010 also features a customised Google Maps overlay that divides Australia into its federal electoral districts, showing the currently sitting members. As the election draws closer it will be updated with the candidates for each seat, as well as information on the location of polling booths for each electorate.

You can also find convenient links to the major political parties' YouTube channels, so you can get your information straight from the horse's mouth. 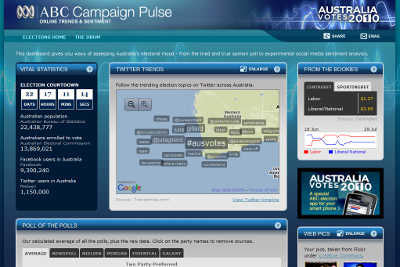 The ABC Campaign Pulse Web site is heaven for statistics junkies. Whether you want to check the current bookies' info to find out who's tipped for a win, check out aggregated polling information, or just get an update on how long until the whole show's over, it's a perfect one stop shop. It can be a bit full-on to start with — there are a lot of things to look at — but we really like some of the features like the trending Twitter topics board and the Hot or Not box summarising public sentiment about political leaders.

Have you got any other suggestions for keeping up with the 2010 federal election? Let us know in the comments section.