Fans of Fallout 3 can rest easy: you will almost certainly love Fallout: New Vegas. At E3 2010, I seized the opportunity to try out Fallout: New Vegas, but not without some trepidation. After all, while the thoroughly enjoyable Fallout 3 was created by Besthesda Softworks internally, New Vegas is being developed by Obsidian Entertainment.

I was concerned about another developer getting their hands on it, even if the studio technically started the Fallout series. The last thing I wanted was some cocky studio sauntering in with a fresh agenda and a “Let’s upstage Fallout 3 by reinventing it!” attitude.

But first, some background: Fallout 3 took place in Washington DC, rendered a desolate wasteland by nuclear war. The game put you in the shoes of a resident of a vault — an underground bunker untouched by the above-ground devastation. Players trudged through the barren, post-apocalyptic lands and followed the playable character from birth to an untimely death. (Should I have maybe put a spoiler there? Um, sorry.)

In New Vegas, you start off as a grown-up living in the slightly less desolate West Coast. Apparently the nuclear fallout didn’t do nearly as much damage in the west so the bright lights of Vegas are still incandescent — if a little dimmer. You assume the role of a courier who has survived an assassination attempt and seeks to find out why they were targeted. Let’s just assume the now missing package — contents unknown — you were trying to deliver has something to do with it. 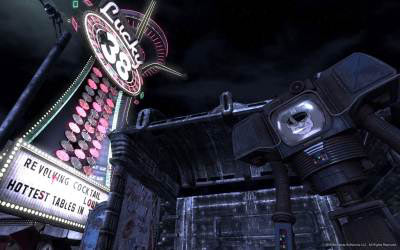 On face value, New Vegas looks almost identical to Fallout 3. You’ve still got the Pipboy 3000 and the Vault-Tec Assisted Targeting System (V.A.T.S.) makes a return — along with the glorious slow-mo decapitation sequences that go hand-in-hand with it.

During my time with the New Vegas demo during E3 2010 I was thrust into the decadent landscape of Sin City, but it was like seeing an old friend again. Hell, the game could be set in New Chinatown and it would still be a familiar experience — the aesthetics, character designs and user interface are more or less identical to Fallout 3 (as expected from a standalone expansion).

The controls, as far as I could tell, were the same as Fallout 3's, making it a very pick up and go affair for veterans of that title. After a brief tour of a casino, it was killing time and I was treated to a short combat session in which I couldn’t help but abuse V.A.T.S. for some gory headshot action. 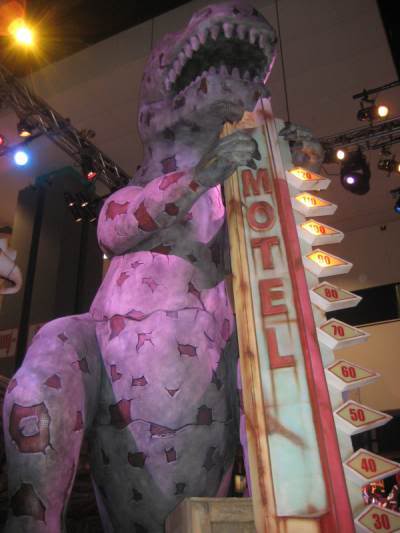 Obsidian may be the new home for ex-staffers of Interplay — the studio that made the first Fallout games — but it has been careful not to upset the diehard Fallout 3 fans. You’ve still got the old-style music (albeit from a different era), the awesome V.A.T.S. combat system (very true to the recurring tagline “War. War never changes”) and the same sprawling landscapes of decay and ruin.

But look beneath the surface and you’ll see a number of background upgrades. Special attacks using V.A.T.S. are now available, along with iron sight for all guns. Weapons can now be modded; if you’ve always want a scope on your pistol, you can have it. 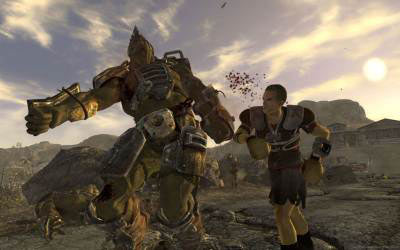 And its not Vegas unless you can gamble to your heart’s content, so there are naturally gambling minigames to try your luck with.

If you are expecting New Vegas to be revolutionary for the Fallout series, you'll be disappointed. There is a hard mode if you thought the old Fallout was too easy for your taste, if that is any consolation. However, if you want a repackaged Fallout 3 with a brand new storyline and some finetuning, then break that piggy bank and go pre-order Fallout New Vegas today.