When Microsoft announced Project Natal to the world, certain members of the GamePro team were worried. Was the company “doing a Nintendo” and kiddifying its console beyond all recognition?

We feared the machine we knew and loved would be cynically repackaged as a casual toy for the family — a Wii for the next generation. The Xbox 360’s hardcore image would soon be dead and buried, and its legacy forever tarnished (or so we feared). 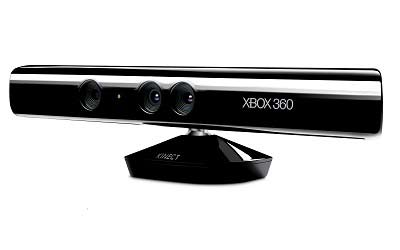 The artist formerly known as 'Project Natal'. Underestimate it at your peril.

Well, it turns out we were all stressing about nothing. Phew, eh? After spending some quality time with Kinect at this year’s E3, we can confidentially report that there is nothing even remotely ‘casual’ about the experience. In fact, it arguably goes too far in the opposite direction.

Sure, the initial launch line-up might star cuddly lion cubs and cutesy avatars, but appearances can be deceiving. These games are set to deliver some of the most gruelling battles of your gaming career, forcing you to learn unfamiliar skills from head to toe. It’s like the Nintendo Wii on steroids. 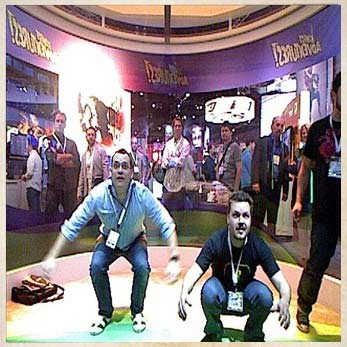 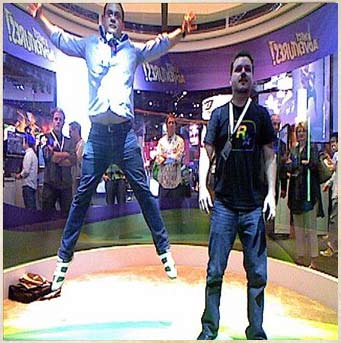 These men are professional games journalists. Weezing death is imminent.

Instead of merely giving your fingers a workout, Kinect puts your entire body on the line; and by God do you feel the burn. In a five minute game, we probably got more exercise than we had over the entire previous year. This is a device that separates the men from the boys, the stud from the cattle, the svelte from the fat. We sadly fit into the latter categories -- which made us even more determined to kick Kinect's butt.

But it’s an uphill battle for an unfit gamer (is there any other type?) Indeed, the amount of running, jumping and ducking that these games demand is so intense, one of our colleagues almost puked on the showroom floor. Now that’s hardcore. 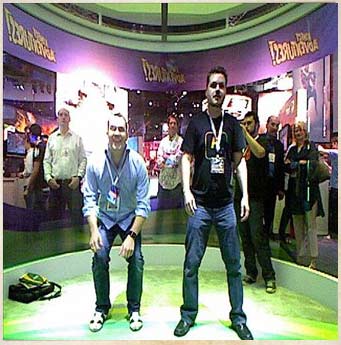 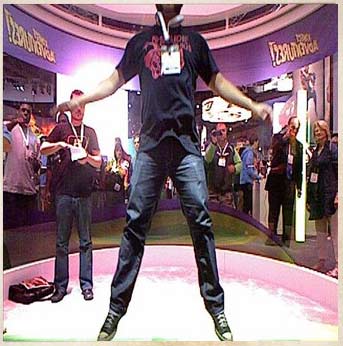 Pretty fly for a white guy.

After a few minutes of playing Kinectimals, I was actually getting heart palpitations -- and for once, it had nothing to do with the hot promo girls sandwiched in our booth. We basically had to run a virtual obstacle course, with our onscreen avatar mimicking our every move. Star-jumps featured prominently. Star-jumps. The game even forces you run the course twice — a Herculean effort that even Chuck Norris would balk at.

When ushered into the next Kinect booth, the sweaty throng of journalists had the look of cornered animals. Just how much more of this torture were we expected to take? Our portlier brethren had the sickly grey-green hue of walking corpses — and we still had four more games to play. By the time we reached the full-tilt boogie of Dance Central, most of us were just about ready to keel over and die. Was it fun? Absolutely. Was it casual? HELL NO.

Check out the embedded video. You are expected to match their dance moves to the letter. Has Microsoft even seen the average gamer?

If you attempted to play this thing with your Wii-loving grandparents, they would almost certainly expire on the spot. That’s right ladies and gents: Kinect is so hardcore it can kill your Grandma. [He’s joking of course. -- Legal Dept.] I think that's something every hardcore gamer can get behind.

Except the fat ones, obviously.

In Pictures: My First E3, by Spandas Lui.