About four years ago, game designers Keith Burgun and Blake Reynolds got together and formed a small development team they called Dinofarm Games, which Burgun now claims "only works in dead genres." After starting and prematurely shelving a small Java game, the two began work on a rougelike that would eventually become 100 Rogues. With the help of publishers Fusion Reactions, Dinofarm released 100 Rogues on the iTunes App Store for the iPhone and iPod Touch. The game, which is an interesting, arcade-like take on the roguelike genre, was incredibly well-received critically, even earning a perfect 5/5 stars rating from myself in the May 7th edition of GamePro's own App Store Games of the Week article series.

Wes Paugh of Fusion Reactions is the title's lead software developer. As an employee of Fusion, which has never before been involved in video game development, he formed the more technical side of the team, while Burgun and Reynolds were able to focus on the more artistic elements of the game's creation. We got the chance to chat with Paugh and Burgun about the development of 100 Rogues, their inspirations, and some details on future updates of the game.

GamePro: Tell us a little bit about yourselves. How did you first get into game design and what are your roles at your respective companies?

Keith Burgun: I got into game design in 1993 when I got my first PC. The second I realized you could actually "make games," I was plugging away with QBasic, making little 2D shooters and stick-figure fighting games. Officially, my role is "Lead Designer", but I end up doing a lot of other things, like writing half the game's soundtrack, and making the tilesets and the GUI artwork for the game, as well as a few other odds and ends.

Wes Paugh: My role at Fusion is Software Developer for 100 Rogues. I landed the job through RIT's co-op program my senior year. I've been programming about a decade, some games, some just pet projects. The first commercial game I worked on was with a scripting gig on Vicarious Visions' Spider-man 3.

GP: If it's possible to peg it down to one or two things, what was the inspiration for 100 Rogues?

KB: Initially, the idea was "let's make a POWDER clone!" But as I did more research on the genre, (partly thanks to establishing a friendship with GameSetWatch editor and roguelike-guru John Harris) I realized that we could do much better than a POWDER clone. The inspiration comes from many roguelikes, Shiren the Wanderer and Dungeon Crawl: Stone Soup being the main ones, but also it came from Team Fortress 2, WarCraft III, and Chess.

GP: So I know that there have been additional classes announced for the game. What can you tell us about them and when will we be able to get our hands on them?

KB: The Dinoman Bruiser is a feral beast, with no magical abilities but huge stats. The Skellyman Scoundrel is a female skeleton thief, with acrobatic, evasive, and assassin-style moves. You'll get your hands on them when they're done, and not a moment before. I hope to have one of the classes out by July, but we have so many improvements and additions to make before then, so we'll see.

GP: You've recently released an update that fixed some problems that players were having with shields before. Are most of the game's previous issues with crashing resolved?

WP: The initial launch of the game was, by any account, unfortunate. Shields were part of the issue, but there were definitely a few last-minute changes that introduced unanticipated instability, and there has been some uncertainty of how the game would handle on devices with conditions actual players impose that I'm not able to reproduce while maintaining a sane and productive life. The first update to the game made huge improvements to stability, and yes, I can now say that most of the issues with crashing have been resolved. Still, performance and stability are top priority for me, and additional work can be done and is being done in these areas. 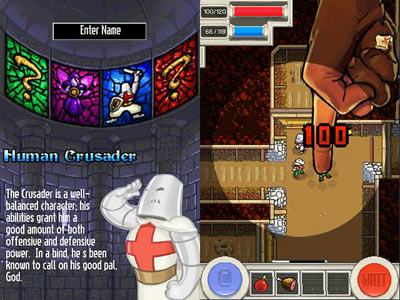 GP: Is 100 Rogues the only game that we'll see coming from Fusion Reactions any time soon or are there other projects in the works?

KB: I can say that Dinofarm Games has already started production on another game. It's a "wargame" -- think Panzer General plus personality -- a genre which used to be rather big in the mid 90s, but has disappeared.

WP: As for Fusion, it's all up in the air based on the success of 100 Rogues. Certainly it will continue to be supported, and is more than worthy of my undivided attention with the updates currently planned. If we can afford to expand the team and take on a new project, then we've got plenty of ideas to fuel.

GP: There's been a lot of good things said in the press about both the music and art in 100 Rogues. Who are the people primarily responsible for those parts of the game?

KB: The art was mostly done, and directed by Blake Reynolds. I just did HUD artwork, tilesets, and items. The music was half done by myself, and half by Mr. Reynolds, as well. I wrote the Bandit Hole music, he took the Dungeon. It's pretty much split 50/50, who wrote the soundtrack. You can download it online to see who wrote what, specifically.

GP: Given the unique, arcade-style nature of 100 Rogues, it's kind of a revitalization of the traditional rougelike, an otherwise dead genre. What's another genre that you feel could benefit from having new life breathed into it?

KB: Sports games are in the most desperate need of improvement. If I were to make one, I'd make decisions based on what's best for gameplay without as much concern for staying true to a real-life counterpart. I would cite Nintendo's Ice Hockey as an example of what I mean. The concern should be for what will make the best video game possible, not for how close to real life it is.