The 2010 World Cup in South Africa is almost upon us and the excitement is building each day! For those unfortunate souls (myself included) who have to work during this year's World Cup, an extra dose of caffeine to get around the lack of sleep is one way to stay ahead. The other is a mobile phone that is optimised for watching video content, keeping you close to all the goals, skills and thrills of the 19th FIFA World Cup. A big, bright screen, a good multimedia player and a fast processor are just some of the key aspects we've looked for, as we round up the best mobile phones for video playback!

Apple's iPhone has taken the mobile phone industry by storm and much of its original wow factor was a result of its 3.5in touchscreen. The iPhone has one of the best displays on the market, and the latest version, the 3GS, is faster, more efficient and has more memory than the previous 3G model, making it ideal for watching video content.

The iPhone also kick-started the mobile app market with the App Store, enabling users to download a range of third-party applications including games, productivity suites, utilities and social networking apps. There is a wealth of World Cup–related applications, including the official FIFA World Cup iPhone game produced by EA Sports.

If you don't already own an iPhone, you can grab one before the World Cup starts from any major Australian carrier, including Telstra, Optus, Vodafone, 3 and Virgin Mobile. For football fanatics, we'd recommend Optus — the telco is the official 2010 FIFA World Cup mobile broadcaster in Australia, so all Optus customers with a 3G capable mobile phone will have access to free, live streaming of World Cup matches and a range of other content including video clips on demand, screensavers and ringtones, live scores and statistics. 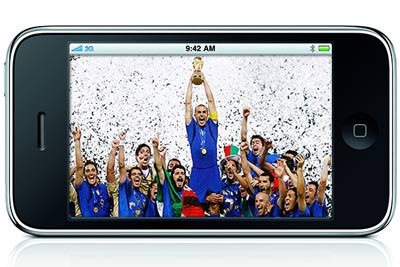 The iPhone's large screen makes it ideal for watching video content and all Optus customers will be able to watch live streamed World Cup games.

The first Android phone to be released in Australia by Telstra, the HTC Desire boasts an outstanding 3.7in AMOLED display — it's larger, brighter and crisper than the iPhone's screen.

In addition, the Desire has a highly impressive design, one of the fastest mobile processors available, an excellent customisable user interface, as well as all the features of the latest version of Google's Android operating system. HTC Desire users also have access to Android's own third-party application store, the Android Market.

The HTC Desire is currently available exclusively through Telstra in Australia. Be sure to check out just exactly how the HTC Desire shapes up against the Apple iPhone in our head-to-head comparison.

The HTC Desire's 3.7in AMOLED display is larger, brighter and crisper than the iPhone's screen.

Samsung's HD Icon was the world's first mobile phone to record HD 720p video. It also has an 8-megapixel camera and features a music application that allows you to flip through your album covers in a style very similar to the iPhone. The HD Icon has a 3.7in AMOLED display that's similar to the HTC Desire's, and it provides vibrant, rich colours and outstanding viewing angles. This makes it one of the best multimedia smartphones on the market.

The Samsung HD Icon is currently available through Optus and Virgin Mobile. 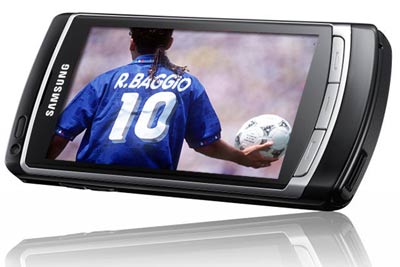 Sony Ericsson's XPERIA X10 smartphone is the company's first handset to run Google's Android operating system. The coolest feature of this phone is its massive 4in touchscreen display, dwarfing even the HTC Desire and the Samsung HD Icon. The XPERIA X10 also features Sony Ericsson's Timescape application, setting the phone apart from the abundance of other Android smartphones hitting the market. 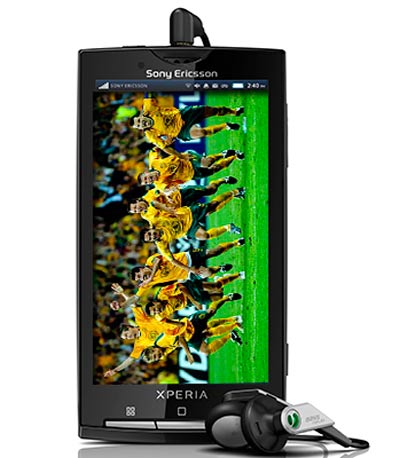 The XPERIA X10 has a 4in touchscreen.

The XPERIA X10's 4in display is big but the HTC HD2's is even bigger. This Windows Mobile smartphone has a massive 4.3in screen. Though this display lacks AMOLED technology, its sheer size makes it almost like a mini TV, so it's great for video playback.

In addition, the HD2 has superb construction and its impressive hardware combines with HTC's Sense user interface to create an excellent user experience. HD2 users also have access to Windows Marketplace for third-party apps. Though it's smaller than the iPhone App Store and the Android Market, Windows Marketplace will continue to grow.

The HTC HD2 is currently available exclusively in Australia through Telstra. 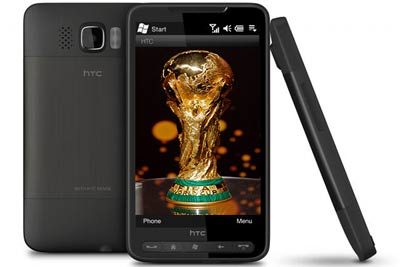 The HTC HD2 has a massive 4.3in screen, almost making it a mini TV.