Watch out, Google: There's a new Doc in town.

As of now, the service is still in beta; anyone can view documents, but in order to edit or create new ones, you'll have to join a wait list. I was able to take an early peek at the full functionality, though. Here's a look at what I found.

At a glance, Docs for Facebook seems awfully similar to Microsoft's recently announced Office 2010 Web edition. And it is: The service is actually powered by Office 2010. The main difference, really, is the existence of the Facebook connection and the added sharing opportunities it presents.

That connection starts with your very first step: You sign in to Docs for Facebook using your Facebook ID, either at Docs.com or within the official Facebook app. Once you're signed in, you can create or upload new Word, Excel, or Powerpoint documents, or you can view documents created by any of your Facebook friends. The experience is essentially identical whether you're accessing it via Docs.com or via the in-site Facebook application.

The actual viewing and editing interface will feel familiar to anyone who's used Microsoft's Office products (which, in this day and age, is pretty much everyone): You have a menu bar filled with formatting options at the top of your document, along with standard menus such as "File," "Insert," and "View." Spreadsheets allow you to resize columns and perform most basic functions. 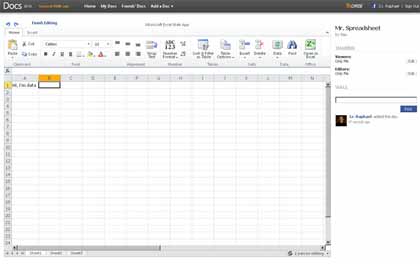 One plus of the program not present in other Web-based collaboration tools: Docs for Facebook allows you to move any document into your own desktop-based Office software for viewing or editing; there's just a single button you click to make the transition. The desktop viewing and editing functions are compatible with both PC and Mac versions of Office; you do, however, need Office 2007 or a more recent version in order for them to work. 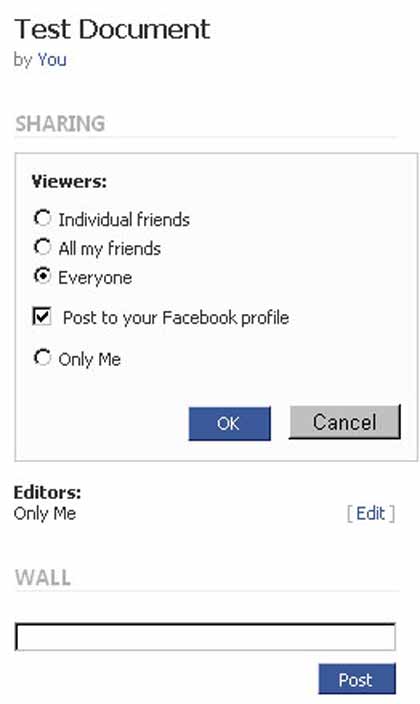 The sign-in and editing process is all fine and dandy, but Docs for Facebook's biggest selling point, obviously, is its social component. Upon creating or uploading a new document, Docs for Facebook gives you the option to share the file with any number of friends on Facebook. You can specify individual people as approved readers or editors, or you can opt to make the document public -- to all of your friends, or to the entire Internet -- and have it posted on your Facebook Wall as well. 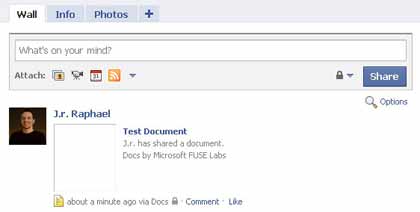 When it comes to the sharing, the appearance of Docs doesn't look terribly different from what you're used to seeing: A shared document appears on your Facebook Wall and News Feed the same way a shared photo or status update would, except it says "via Docs" at the bottom. Anyone can click it to view it, and anyone can "like" it or comment on it, too.

Docs for Facebook does offer a couple of options to expand its Facebook presence: You can add a specialized tab to the top of your profile, making all of your created documents accessible in a single location, and you can add a Docs bookmark onto your Facebook home page so you can access the app without having to search.

Generally speaking, Docs for Facebook is pleasant enough to use, though it did move a bit slowly during my tests. I also encountered a couple of errors while moving through the program, and the documents I shared on my Wall had an out-of-place-looking blank image where an icon should have been. With that said, the program is still in beta and is likely being bombarded with traffic right now, so these may or may not be long-term problems.

One can't help but wonder whether Docs for Facebook will be able to hold its own next to an established and widely used service like Google Docs. Personally, I suspect it could end up attracting a largely different audience; the type of people using Google Docs for business-based collaborations seem unlikely to port their projects over to a socially oriented service like Facebook, even if the offering does bear Microsoft's name. Businesses looking to use Microsoft Office online, one would imagine, would be more apt to veer toward the standalone Office 2010 Web edition.

Make no mistake about it: Docs for Facebook makes its target clear, and it certainly doesn't seem to be the business-based user. The service's "Overview" document, written by Microsoft FUSE Labs' Pat Kinsel, describes Docs as a "social-productivity experience" and indirectly addresses the obvious Google Docs comparisons.

"There are other services out there that let you create and collaborate on documents," Kinsel says, "and there are others that support sharing, discussing and discovering documents. But what makes Docs special is it's the only service that supports the complete document lifecycle. That coupled with seamless integration of Microsoft Office 2010 and Facebook makes Docs the best possible document service for the Facebook environment."

The question, then, becomes whether a "social-productivity experience" is something people actually need -- whether collaborating on documents is an activity users want within their Facebook worlds.

Microsoft and Facebook are clearly betting that it is. Only time will tell if they're right.