HDMI, RCA, S-Video--sorting through the alphabet soup of audio/video cables can be difficult. Read on for everything you ever needed to know about plugging in your audio/video equipment for your home theater or for on-the-go jammin'. 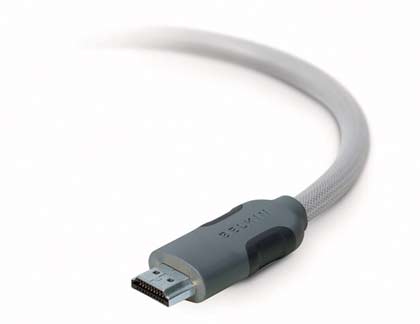 If you have a choice, select it instead of: Component video cables, analog audio cables

It's similar in performance and use to: DVI

It adapts to: DVI, Mini-DVI, Micro-DVI

Add more ports by: Connecting to a receiver

In addition to carrying pristine HD video at 1080p and beyond, HDMI can supply surround-sound audio, including Dolby Digital and DTS. This digital cable is your go-to cable for most home theater connections, including TVs, receivers, and game consoles. It supports HDCP encryption, so copy-protected movies should play without problems. This type of connection is available in several versions; HDMI 1.3 is typical, while 1.4 is rolling out now. The new version is capable of additional bandwidth for enabling high-resolution 3D video, and is part of the Blu-ray 3D specification. 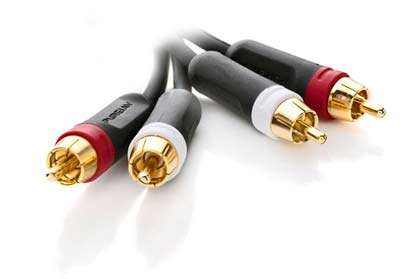 Use it for: Basic, analog audio and video; occasionally for digital audio

If you have a choice, select it instead of: Coaxial cable

It adapts to: Mini-jack ends (commonly found on camcorders and MP3 players)

Add more ports by: Connecting a splitter, repeater, or receiver

Introduced by RCA, this connector is ubiquitous among home audio and video components. Basic setups might use a white plug for mono audio--the left channel--and a yellow plug for video (not shown here). A red plug usually signifies right-channel audio, but the connector can carry other signals too. It's occasionally used for digital audio, in which one cable carries a full surround-sound signal. It's also the same kind of cable as for component video (see below).

Component Video (aka Y-Pb-Pr or RGB) 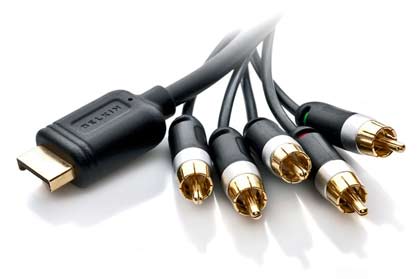 Use it for: HDTV video (especially older TVs), game systems

If you have a choice, select it instead of: Composite RCA video, S-Video

It's similar in performance and use to: VGA cables (especially the RGB version)

It adapts to: VGA, if your devices use the RGB version

Add more ports by: Connecting a splitter, repeater, or receiver

Component-video signals transmit over three RCA cables, typically coded red, green, and blue. Component video works at up to 1080i, making it a good option for analog HDTV connections. The cables typically run Y/Pb/Pr, which separates brightness, blue, and red to individual cables. Some systems use other signals, often RGB (red, green, blue); certain devices support both kinds of signals, but if you get a green-tinted image, you're probably set up for the wrong color space.