Adobe’s Creative Suite 5 has just been announced, and here we have all you need to know about the new collection of creative tools, including step-by-step guides to the main applications. It's expected to be on the shelves by the end of May, featuring revamped versions of its leading arts, design, video and animation tools – plus two new web-design applications, Flash Catalyst and Flash Builder.

The suite features new tools to improve your art (such as Photoshop CS5’s new 3D extrusion tool Repoussé), and mundane but useful productivity aids (such as InDesign’s Gap tool) that make using the suite that bit smoother.

Behind the scenes are some seriously ramped-up components – such as 64-bit After Effects and Premiere Pro to make animating and editing faster than ever – and at last a 64-bit Photoshop for Mac (Windows went 64-bit with CS4). In today’s time-sensitive workflows that means more than any amount of whizzy features.

With each new version, Adobe tweaks Creative Suite’s interface to make the applications work more smoothly, both on their own and together. In version 5, these include a new Mini Bridge – a slimmed-down version of Bridge that works within Photoshop CS5, Photoshop CS5 Extended, and InDesign CS5, providing image access and management.

As before, you can buy most applications individually, as a bundle (Web, Production, and Design bundles), or as a Master Collection, featuring everything. 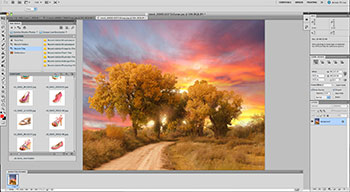 Photoshop seems to introduce a ‘wow’ feature with each version. This time round there’s more than one. Digital artists are well served with the Mixer brush, a new paint system with a ‘wet canvas’ method for picking up multiple colours on a single tip, and mixing and blending them with the underlying hues on the canvas. The Content-Aware Fill tool removes elements from an image, magically filling the space with matching lighting, tone, and noise.

For 3D workflows, there’s the Adobe Ray Tracer (ART) 2.0. This progressively renders 3D scenes with an option to re-render after a pause, or perform selective renderings.

Another significant feature is Repoussé, which lets you quickly extrude text to create logos and 3D artwork. Once a model is created, you can use new tools to easily load a material and drop it into different meshes. Also new, the Shadow Catcher feature lets you easily generate and adjust a shadow on the ground plane of a scene.

For further realism, you can use an HDR image to light your scene, or create depth-of-field effects by adjusting the zone of sharpness with the new Distance and Blur controls.