This week, we checked out Red Dead Redemption’s multiplayer mode with a posse of the good, the bad and the ugly (otherwise known as the Australian gaming press.) Having been previously wowed by the single player campaign on two separate occasions (check out our coverage here and here), we were keen to discover just how well the multiplayer stacked up. Would it be the gaming equivalent of Sergio Leone’s timeless cowboy classic A Fistfull of Dollars? Or closer to the Fresh Prince’s Wild Wild West?

At session’s end, the forlorn faces of the assembled media scrum said it all (i.e. – nobody wanted to stop playing!) 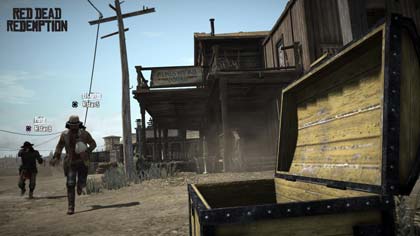 To appreciate what makes the multiplayer so much fun, you have to cast your mind back to when you were a kid with scabby knees and a penchant for mixed lolly bags. Remember how you used to dash around the backyard, aiming plastic six-shooters at your buddies? Well, Red Dead Redemption’s multiplayer is essentially ‘Cowboys & Indians: The Video Game’ (but without the Indians). Simply put, it offers some of the best multiplayer gaming we’ve experienced outside of the FPS genre. We can’t wait to sink out teeth into it again; especially the madcap Goldrush mode (on which more later).

My gun is bigger than yours… 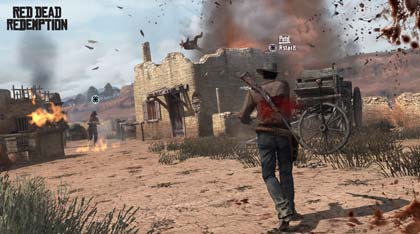 Much like the game proper, Red Dead Redemption’s multiplayer aims to expand upon Grand Theft Auto IV. According to Rockstar, the goal was to raise the bar for third-person multiplayer in an open world environment. This last detail is key – and part of what makes Red Dead Redemption so unique. Rather than presenting you with a handful of multiplayer maps, the Free Roam mode takes place across the entire game world. It’s essentially one big game lobby; from the dusty frontiers of New Austin to the Mexican-inspired Nuevo Paraiso.

Up to sixteen players can take part at once, with the ability to form eight-member posses. At present, we’ve yet to try out the Free Roam mode, but Rockstar promises it’ll be packed with plenty of incident and adventure, with a wide range of challenges to partake in including sharpshooting and hunting. 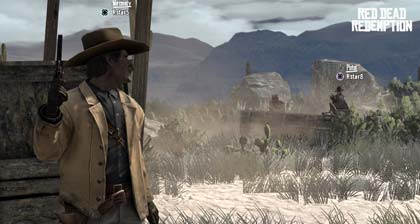 Experience Points (XP) also play a large part in multiplayer, with almost every action contributing to your score. The accumulation of XP allows your character to level up, which in turn gives them access to new challenges, better weapons and faster steeds. This is sure to bolster the multiplayer’s longevity, especially for self-confessed scoreboard junkies determined to ‘max out’ their character. In short, Rockstar has ensured there are plenty of reasons to keep coming back.

Of course, the multiplayer would quickly lose its appeal if your posse just roamed about the countryside, shooting at varmint. Fortunately, there’s a whole brace of action-packed game modes to partake in, including Gang Shootout (AKA team death-match), Gold Rush (a rollicking treasure hunt-cum-shootout), Gang Match (AKA capture the flag) and Free-For-All (er, Free-For-All).

Before each match begins, the players must first compete in a quick minigame. These consist of duels between participating players, who face off in teams or individually; depending on the game mode selected. As you’d expect, the shootouts are usually over within seconds, with the last man standing receiving a handful of XP. (Note: shooting the opponent directly opposite you and then cowering behind a barrel seems to do the trick.) 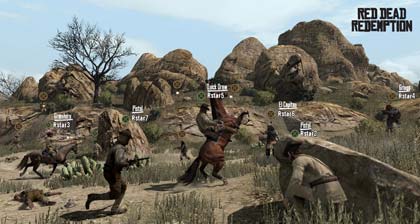 While the minigames are fun, the preceding ‘face-off’ animations were a bit lengthy for our liking (indeed, they usually last longer than the actual shootouts). Hopefully this will be rectified in the finished product.