"Why wont those idiots let me into their crappy club for jerks?”

Elitism is not uncommon in most clubs that require membership and NeoGAF is no exception. NeoGAF catches a lot of criticism for being the gaming equivalent of the Order of the Garter: you can apply -— the first step to acceptance requires that you sign up with a paid-for email address and not a free service like Yahoo! Mail or Gmail -— but you stand a high chance of rejection.

Malka believes NeoGAF’s strict moderation and entrance policy helps maintain a calmer environment than what’s typical for gaming forums, and therefore the community’s continuing popularity is ensured. “All the new members are let in by hand…and they’re let out at the first sign that they’re from the side of the Internet that posts comments on YouTube,” Malka says. “This ensures that people want to read NeoGAF just as much as they want to participate, rather than participation being the main draw.”

But attempting to gain membership at NeoGAF is an intimidating process that often ends with hurt feelings, particularly since rejection is delivered in a blunt email (which can take up to three months to arrive) with no explanation why the applicant was shunned. “This is like the third time in like three to four years I’ve tried to register an account [at NeoGAF],” complains a poster named Aszurom over at the Quarter to Three [QT3] gaming, media, and tech forums. “The first time I got an actual rejection letter; other times were silent ignore.”

Derogatory remarks about NeoGAF follow Aszurom’s complaint, punctuated by an anti-NeoGAF illustration or two. “WTF is a NeoGAF?” asks a member named Mightynute.

“Imagine the bastard child of QT3 and a Twilight fandom board,” responds a member named Kraaze. 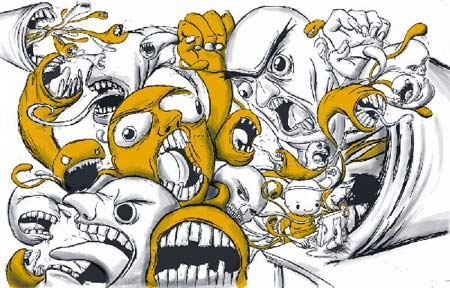 The online community can can be a big bad place for the uninitiated. NeoGAF is no exception...

Even Junior Members who are cleared to post might find themselves booted for saying the wrong thing… at least until they clear the 200-post count and are a member of NeoGAF for two months. “If you f*** up, you’re gone permanently,” the rules state firmly. “There is a no-tolerance policy on Junior Members.” The rules also list memes that users are forbidden to repeat, and Sites That Must Not Be Named -— including Joystiq and Go Nintendo for “misinformation.”

Yet, despite NeoGAF’s reputation for elitism, membership application is as high as ever. Everybody wants in. Malka is aware that NeoGAF’s moderation policies are not popular, but he has no plans to change them. “The entrance requirements probably aren’t going to move toward an open system; most likely things will either stay the same or become stricter,” Malka says. “Most visitors are just viewing NeoGAF and not posting. And they’re reading because there’s material worth reading, and that can only continue to be the case if the members are heavily moderated.”

Malka acknowledges that NeoGAF can be an intimidating place -- but he doesn’t necessarily believe that’s a bad trait for the community. “Way back in 1999, I read GAF daily for several months before registering an account. It was intimidating even then. But because it was, I didn’t rush in and make a fool of myself. Instead, I got a feel for the discussions, started becoming more knowledgeable about what was being talked about, and then, when I did join, I made sure to justify any positions I took in my posts and to speak tactfully. It’s an atmosphere I can appreciate, and so trading that for ‘welcoming’ isn’t on my to-do list.”

Malka says he’s not a fan of warm cuddles for himself, either: other members can, and will, challenge his opinions. “Hell, I may run the site, and everyone values their accounts, but I’ll still get called out at the drop of a hat if I don’t back up my positions thoroughly.”

Not every rule is in place to intimidate new users, however. The air in NeoGAF can get a little blue at times, but members who use racist language are banned. There is also a no-tolerance policy for anti-gay language, a problem that plagues most gaming message boards as well as multiplayer matches over Xbox Live and the PlayStation Network.

“NeoGAF has a sizable gay community,” the community’s FAQ states, “and if that bothers you, go somewhere else.”

Developers and Gamers, Together at Last

One of NeoGAF’s biggest draws is that it’s an invaluable “neutral ground” where developers and gamers can meet. Brian Fleming, co-founder and producer of Sucker Punch Productions, knows why he enjoys soliciting the opinions of NeoGAF members. “I think the ‘gaming IQ’ of posters on NeoGAF is as high as it is anywhere,” he says. “Quality posts, diverse, intelligent opinions, and a large community -— it’s pretty special.”

“We really do appreciate all the energy and passion gamers have,” Fleming says. “Gamers are a big part of our inspiration. I’ve read the entire 7000-post thread on NeoGAF about InFamous and it’s incredibly energizing.” James Stevenson, senior community manager at Insomniac Games, has forged lasting friendships with GAF and NeoGAF community members. “Big industry events are always a blast,” he says. “We usually get to meet up with a bunch of folks we know by handle and avatar only.”

And sometimes there’s the opportunity for a unique brand of fun. “During the big Resistance: Fall of Man tournament, one GAF member, BobTheFork, was closing in on qualifying for the trip to New York as part of the 1-v-1 tournament,” Stevenson says. “We were able to watch his game live and it turned into a huge event, with tons of us watching and cheering on our ‘Internet friend from GAF’ in his qualification match.

Bob won the game, and I met him a few weeks later in New York City along with a bunch of other great players for what turned out to be an awesome weekend.”

Stevenson believes it’s that sense of community that makes NeoGAF special, but notes that the rapid pace of the community is attractive as well. “One forum to discuss games: may the most interesting stories and most-played games win.”