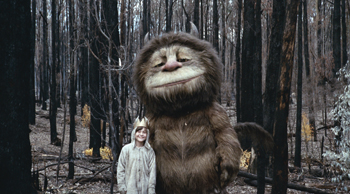 It’s a depth that relies on the facial visual-effects work by London studio Framestore, which combines seamlessly with giant physical suits used on-set, and vocal performances from the likes of James Gandolfini and Forest Whitaker to enhance a movie that perfectly captures the exuberance, imagination and vulnerability of childhood.

Maurice Sendak’s book details the journey of Max – a rebellious little boy – to the land of the Wild Things. Here he wins over the creatures and becomes king, before returning to the safety of home. It’s all told in only 300 words, accompanied by the iconic illustrations that have inspired budding designers and artists since its release in 1963.

The film version – expanded thanks to a script by Dave Eggers – examines his unsettled home life and his adventures in a land born from Max’s imagination and ordered by the abstract logic of the playground.

To bring this world to life in a frame of magic realism, Jonze first captured video and audio of the voice actors performing their lines in a studio. Other actors inside 10-foot costumes then created physical performances on-set to match those of the voice actors.

Finally, Framestore added CG faces so expressive that you quickly forget that they’re CG, making the film even more involving. This approach gave the film a hand-made look, rather than the curiously obvious feel of full-CG creatures based on motion-capture data, such as Lord of the Rings’ Gollum. 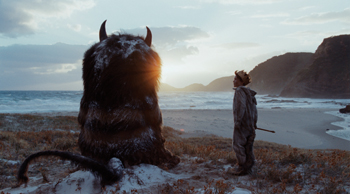 For the team at Framestore, the project began with an unusual brief. Jonze sent them a video he’d filmed of Sendak, who told them fiercely to “make this the best thing you’ve ever done – no futzing around.”

Jonze himself implored them to make sure “these creatures lived and had a soul”. But for many on the team, the driving factor was to help recreate a book that was a huge presence in their own childhoods.

“I remember the book vividly from my childhood,” says 2D supervisor Sirio Quintavalle. “The expressions, the loneliness, the sense of mischief and the comfort of being home again. It is such a powerful book: one that frightened me yet I kept finding myself being drawn back to it.”