I want to be Nathan Drake, a sniper on a tightrope, fingertips that grip better than steel claws, a modern swashbuckler who's parlayed the half-tuck from design band-aid to video game vogue. He's wittier than I'll ever be, far better looking without a shave, and the playable linchpin in Naughty Dog's Uncharted 2: Among Thieves, the PS3-exclusive sequel to acclaimed 2007 action-adventure Uncharted: Drake's Fortune. 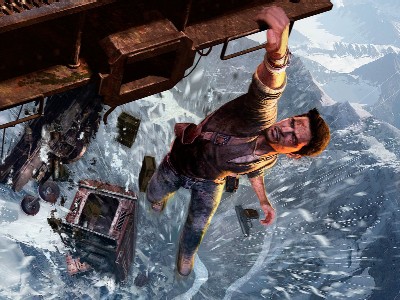 Uncharted 2's out on October 13th, so we caught up with Naughty Dog co-president Evan Wells and creative director Amy Hennig for an over-the-shoulder peek at the design process.

PCW:: The early buzz on Uncharted 2 is it's a reason to own a PS3. What does that make it if you already own a PS3?

Amy Hennig: [Laughs] A good justification for having bought one, I guess, right? A vindication for being an adopter of the PlayStation 3? It's great for us to hear how enthusiastic people are about the game, because you never know when you're working on it.

You're just kind of up to your eyeballs and sick of it, and when you start seeing people's reactions, it's such a relief to know that what you were trying to do, you succeeded at, because you lose your objectivity, of course, but also to know you've given people an experience that they're loving that much. It's almost indescribable how cool that is, as a creative person, to know that you've provided that to somebody.

PCW: Uncharted: Drake's Fortune got a lot of great press, but I've had this sense that it was a sleeper hit, that it deserved to sell better than it did. Looking now, the game's actually sold something like 2.5 million to date, putting it in company with games like Killzone 2 or Fable 2. Are you satisfied with the level of brand awareness Drake's Fortune received?

AH: I think you always wish there was even greater brand awareness. Certainly when you're making something, you don't want to feel you're trying to appeal to the lowest common denominator. I think a lot of where we succeeded with Drake's Fortune was on word of mouth, which was great, because as a creator that's vindication for us. It feels like even though this snuck into the marketplace and there wasn't a lot of brand awareness, people told their friends about it, and it just sort of spread like that. It really speaks volumes about the quality of the product.

Evan Wells: It's actually still selling quite well today, and as Amy said, I think it's largely due to the word of mouth it gets. When people play it they have to tell their friends, and it's almost like they've found this hidden gem, which I think creates a stronger sense of attachment where they've found it themselves instead of having it marketed to them.

AH: So it's sort of a double-edge sword, right? On the one hand I think Evan's right, it makes people feel like they have more of a sense of ownership, because they discovered it independently. But on the other hand, you'd love to think you have a blockbuster on your hands. That's what's cool about Uncharted 2. There seems to be a lot more brand awareness out of the gate this time.

PCW: I remember getting lots of requests for coverage by whoever was handling the original Uncharted at the time for Sony, and thinking okay, it looks lovely, but isn't this just another Tomb Raider--or as some said, Dude Raider--riff? I wasn't expecting to play it, finish it, and sit watching the credits spool thinking "Finally, someone who gets the serial-homage adventure thing."

AH: It's kind of funny, because on the one hand, when there's a niche appeal--and I don't even mean it that way, because it sounds like it's limited in its appeal and I don't mean it that way--I think that you do get a fan base that's much more kind of in your corner. They feel like they're in the fight with you as the creators of the product.

To be honest, there's a certain amount of a marketing challenge with a game like this, because what we're trying to do is something that ironically sets it apart in the sea of video games. Heroes and characters tend to be drawn large. Everybody's a little bit of a caricature in most video games, a little bit stereotypical--exaggerated, or a little cartoony.

When we set out to do Uncharted, we decided we wanted to tackle one of these beloved action-adventure games in the spirit of this whole tradition. We knew that in order to pull it off, we had to have a hero who was completely relatable, just a regular guy. So when people saw him and said "Why do I want to play a guy in t-shirt and jeans?" that was a deliberate move on our part, to say look, he's just a guy. He's just like you and me. Maybe a little bit extraordinary in the sense that he's got stronger fingertips. [Laughs]

I think what we saw then, was that a lot of people, when they initially saw the game, because they were used to these exaggerated characters, is that they were like, "What is this?" and "I don't know what to expect going into this." It wasn't until they played it that they fell in love with it. So now we have the foundation of the first game in place. Now people aren't looking at it and making comparisons to other games, or saying "Who's this Nathan Drake guy?"

PCW: What didn't work in the original Uncharted? What did you start Uncharted 2 saying, "Let's not do that again"?

EW: One of the things that we wanted to address right away was to strike a really strong balance between the action and the adventure components. I think people's expectations coming into the first game were that there'd be more adventure and less shooting. While we didn't want to move away from the fact that we are indeed a third-person shooter, we wanted to make sure people felt there was more of that spirit of adventure you've come to expect from the genre.

So it was a design challenge to honor the action elements, then pump the action up even more, without forgetting the adventure or alienating the people who wanted that sense of classic adventure.

AH: Yeah, and just thinking about the question as you asked it, I don't know that we said, "Let's not do that again." I think it was more like what Evan said, how could we get a better balance between some of the game elements so it didn't feel like we were moving from mode to mode. I think it was more a matter of "What did we do okay and could have done really well, if we put the effort behind it?" So, for instance, trying to draw the characters deeper than we did the first time.

We were definitely playing off a lot of the traditions of the adventure genres. Some of the things I'd read on the message boards was that people loved the characters, but could also see they were drawn from traditional stereotypes. And although I never want to be heavy-handed with character development--I want to leave a lot to inference--I wanted to dig a little bit deeper into the characters at this point. I want people to say "This isn't a story I've seen a hundred times" or "This turns in a way I didn't expect it to." That these characters, while being drawn from certain traditional tropes, aren't playing out exactly as expected. That they're coming off more like real people. You see what I mean?