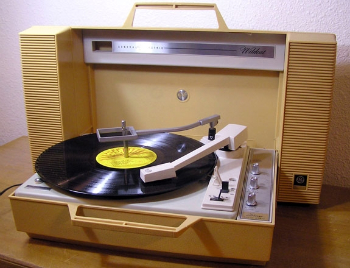 Students in the late 1960s were lucky when it came to music. They had experienced the birth of rock and roll, taken part in Beatle mania and now listened to their favourite recorded songs in (arguably) the purest way possible: on shiny black vinyl LPs or 45-rpm singles.

Record players were nothing new of course, but all-in-one portable players like the GE Wildcat were a perfect fit for dorm rooms.

In the late 1970s, the 5¼in floppy disk ruled the data storage scene. The successor of the 8in floppy disk and the predecessor to the 3½in floppy disk, it was the common size for PCs made before 1987.

The 5¼in floppy could store between 100KB and 1.2MB of data. After the heyday of this old-school floppy, 3½in floppy disks held sway for most of the next decade, followed by CD-ROMs and Zip drives.

Students today have it easy, with their fancy flash drives, some of which can store thousands of times more data than the old 5¼in floppies.