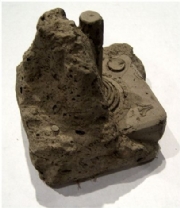 Chris Locke unearthed an amazingly well-preserved fossil of Hilarofustis atarium, commonly referred to as the Atari joystick. This is the most recent "discovery" he has made, but among his Modern Fossils collection you can also spot long-dead boom boxes, aged iPods, obsolete hard drives, and ancient phones.

Yep, technology gets old, fast. While most formerly cutting-edge tech ends up in a pile of yesterday's trash, Locke does his best to preserve specimens the best way he knows how: by burying them.

It started when Locke had some extra rubber after making molds. "I grabbed an old Nintendo controller I had lying around--it was an iconic symbol of my childhood--and I thought it'd be cool to preserve it as a fossil," he says.

That gave him his first taste. Now he regularly haunts his local Goodwill store in Austin, Texas, which receives electronics donations from nearby companies."The guys [at Goodwill] get a kick out of what I'm doing, and they are always on the lookout for cool gear that I could use in my projects." When he's done re-creating something in stone, everything goes back to Goodwill so that the staffers can recycle the parts. ("They just loan me the stuff...which I then destroy.") And whatever they don't have, he looks for on eBay.

Here are a few of the "finds." 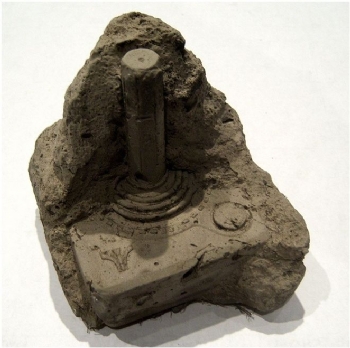 One of our earliest specimens, Hilarofustis atarium occupies the same position on the food chain as Dominaludus nintendicus but predates it by several years. Examples of this particular species are somewhat rare, especially today, as so many other species have arisen to take its place.

This is an early example of the "game controller" unit, specifically from the mid-1980s. The earliest examples of this species appeared in Japan, but quickly spread throughout the United States and the rest of the world within only two or three years. 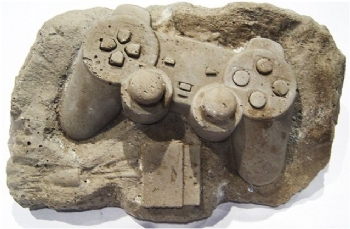 First seen in the mid-1990s, Ludustatarium has been found throughout the world. Similar in origin and function to Dominaludus nintendicus, Ludustatarium is obviously a more complex evolution of the form. 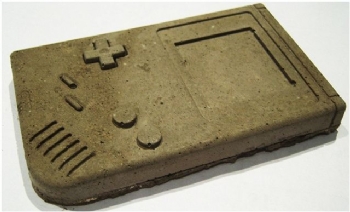 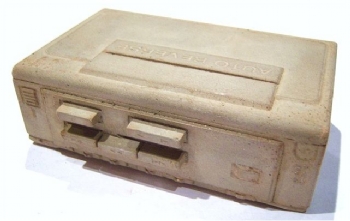 First found in the late 1970s, often in close proximity to Asportatio acroamatis, suggesting a possible symbiotic relationship. This species rapidly evolved into many other forms, including a large, round version (Ambulephebus discus) and the rare Ambulephebus minidiscus.

Experts theorize that the entire Ambulephebus genus was virtually wiped out by the sudden appearance of Egosiliqua malusymphonicus near the turn of the century. Some Ambulephebus remain, but not in the numbers once seen. 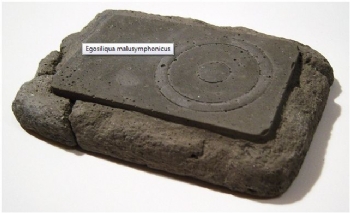 Egosiliqua malusymphonicus, which first surfaced in 2001, remains today in several forms, most closely resembling this one. Some observers speculate that it evolved from Ambulephebus sonysymphonia, while others suspect that Egosiliqua was the natural predator whose presence led to the eventual extinction of Ambulephebus.

Pretty cool, but how does he do it? Locke explains the process: "I make a mold of the actual item in many cases. I start by coating the device in release agents so that the mold separates, then I pour on the rubber. Others I embed in stone, and I give it more of a stone-carving look. For those, I mix up plaster and a whole lot of sand. I start chipping it away with specialized tools. Basically I'm trying to re-create what happens in nature--and what archeologists uncover in Utah--without the whole traveling-to-Utah thing."

The rubber allows him to cast pieces in plaster, resin, concrete, wax, and even soap--but as you might expect, that doesn't come cheap. The mold for the boom box, the biggest one so far, took 8 to 10 hours and US$250. So you can only imagine the costs involved in making something even larger, like an Apple II. But Locke still keeps plugging along, practicing his art and making a few dollars on each sale. Would he love to sell more? No doubt--after all, there's a long line of tech he wants to see properly preserved.

As I write this, he's finishing up a Barbara Streisand 8-track tape and an old Motorola Meteor bag phone. (Fun fact: Some rugged cell phones sold for $2000 back in 1992.) Still on deck are a turntable, an 8-track player, a brick phone, a Commodore 64, and his white whale: "I'd really love to get my hands on a Nintendo Power Glove," says Locke.

So, if you have a spare one sitting around, be sure to drop him a line. Me? I'd put money down on a Vectrex.