A lot has changed in the 20 years since the first laptop computers appeared, including gigahertz processors, color screens, optical drives and wireless data. However, one thing that has stubbornly stayed the same is the conventional clamshell format with its hinged display lid that opens to reveal a mechanical keyboard.

That's about to change. The rules of notebook design and the components that go inside are being rewritten to make the road a better place to work and play.

"Between now and 2015, we expect to see a series of big changes that will redefine what a notebook is and what it looks like," said Mike Trainor, Intel Corp.'s evangelist for mobile products.

With crystal ball in hand, we talked to designers, engineers and marketers about how notebooks are likely to change over the next seven years. Here's what they told us.

Concepts for the Future

First, let's take a look at some concept notebooks. Just as futuristic show cars give us insight into what we might be driving in the future, concept notebooks offer a sneak peek at how we'll be computing.

These concept notebooks typically are created by independent designers and firms retained by laptop vendors. This is highly secretive business -- the designers we spoke were willing to talk about some of their concepts but couldn't tell us who they were working for.

Rarely does a concept notebook make it to the real world as a whole unit, but certain aspects often make it into production. Early 1990s concept devices contained integrated pointing devices, speakers and webcams, all of which are now standard equipment. It's likely that at least some of the new ideas, components and features showcased below will be coming to a notebook near you.

For example, several concept laptops rely on touch-sensitive screens that act as the system's keyboard and mouse and go beyond today's multi-touch technology. Imagine being able to slide your finger across the screen to immediately shut off the display and keep what you're working on confidential, and you get an idea of its potential.

The Compenion concept notebook from independent designer Felix Schmidberger in Stuttgart, Germany, borrows heavily from slider cell phones to move beyond the clamshell. Rather than lifting the lid open, just slide it up. 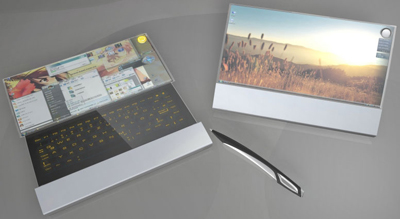 The pair of superbright organic LED panels slide into place next to each other, with the lower panel acting as keyboard or scribble pad. The whole thing is only three-quarters of an inch thick.

"It reduces thickness, but the slider was more about the feel of using the notebook," said Schmidberger. "The idea is to break free from traditional notebook hardware without having to adapt to new ways of using a computer."

Together, the 11-in. screens will yield about 16 inches of usable workspace, so the system has the dimensions and weight of a thin and light system but the screen of a larger one.

Dual-screen systems could well be the rage in seven years. The Canova from V12 Design, a Milan, Italy-based design firm, is closer to the tried and true clamshell layout, but with a twist. 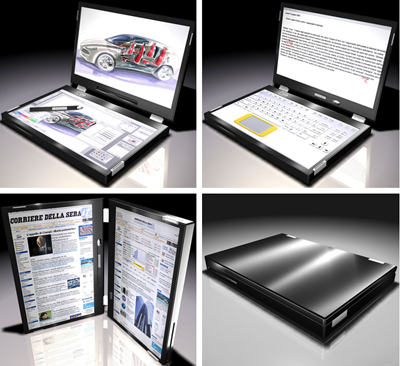 Instead of a display and a mechanical keyboard, the device has two touch-sensitive displays: The upper screen is primarily for viewing applications, and the lower screen is for the mundane activities of typing, drawing and jotting notes. But the Canova can also lie flat for a large expanse of working space.