The average PC user expects that their computer's operating system will consume a fair chunk of hard drive space. Windows Vista Premium can take 15GB of hard drive space to install and tax even modern desktop PCs and notebooks. Indeed, thanks in part to Microsoft, people are used to the endless cycle of hardware upgrades to get the most out of their operating system — or even just make it usable. The developers behind MenuetOS have taken a different tack, however: their operating system is lightweight and incredibly speedy, despite having many of the trimmings you would expect from a modern OS.

MenuetOS offers pre-emptive multitasking, an attractive and modern-looking GUI, a TCP/IP stack for Internet access and more. Most importantly, you can run Quake on it. What's even more astounding is that the entire operating system can fit on a single floppy disk. The secret behind Menuet's diminutive size and astonishing responsiveness lies, unsurprisingly, in the development process. 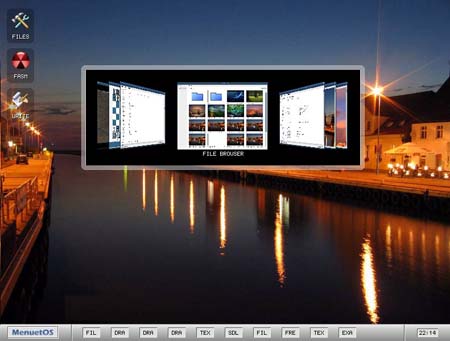 Modern operating systems are written predominately in high-level languages like C and C++. Menuet, however, is written entirely in assembly language: a symbolic representation of machine language. These days many programmers have minimal if any contact with assembly language, but that hasn't deterred the Menuet development team and the result is a slick, compact and super-quick operating system.

Two of the Menuet developers, Ville Turjanmaa and Madis Kalme, took time out to talk to PC World Australia about what inspired them to undertake the daunting task of writing the operating system, the current state of the OS and future plans for it.

Firstly, what inspired the creation of MenuetOS? Most people would consider writing an entire operating system in assembly language to be a pretty audacious project.

Ville: The original idea for assembly OS came a few years ago when I was browsing the Internet and came across to a page which used a scripting language. And even with my relatively new computer, the short script executed quite slowly. So it seemed like there will always be the need to create a language which uses the last cycles from a new CPU. So I decided to go to the other extreme end and just use assembly as much as possible.

Can you give me some idea of the backgrounds of the core developers? Do you have people contributing from outside the core team?

Madis: My passion has always been assembly language. As a teenager I started with some programmable calculators where ML [machine language] was the only way to go. Compared to that, assembly is really a breeze and such an elegant way to program. 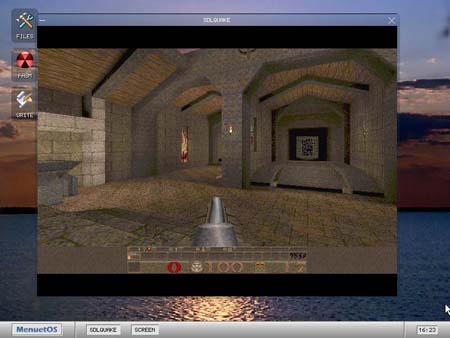 Ville: We come from different countries and with different backgrounds, but most of us core developers have a university background. I've used different programming languages during the last 30 years. From BASIC and Pascal, to C and assembly. And yes, there are people contributing from outside the core team; the MP3 player is one such contribution.

What aspect of Menuet are you most proud of? Are there any parts of the OS that were particularly challenging to code?

Madis: I am very excited about the GUI part because most hobby operating systems go as far as implementing only a command-line type of OS, but with a true-colour, VESA-supported GUI, it differs from all of these and therefore its ideal for games and small graphical demos. The 64-bit register extensions helped me to make a register-only line and circle routines and these I consider my "µ-achievements" that I can be proud of. "Challenging to code?" — I will let Ville answer that

Ville: As for the actual coding, I'm most pleased with pre-emptive scheduling and USB support. Maybe we have also made a small difference to mindsets about what can be done with assembly language.

What next for Menuet? Do you have a timeline for getting to version 1.0? Are there any features coming up that you're especially proud of?

Ville: We need to add new drivers and improve existing applications. Other than that, there are one or two completely new features I'd like to add before hitting the 1.0 mark.

Ville: With a completely new type of open source project, people seem to have strong opinions about what direction to take. Even up to a point when time is actually spent more with disputes than doing the actual coding. And when that happened, I decided to concentrate more on the original path of Menuet with the 64-bit version and with a new type of license. However, I don't have anything against open source or possibly opening up the Menuet64 source later. But with the current licence, I'd say the people are a bit more committed and willing to put more effort in to a new feature.